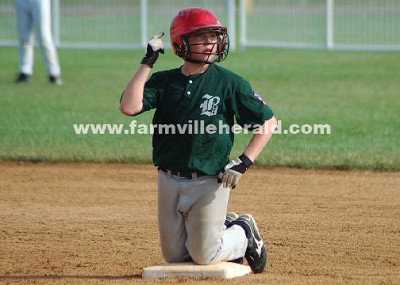 TROUTVILLE – The Buckingham County Major League All-Stars seemingly started the 54th-Annual Dixie Youth Majors State Tournament with confidence at the plate. Then, they all of a sudden lost it only to find it again. After scoring four runs in the top of the first inning against District V champion Charlotte County on the tournament's first day, the BC All-Stars' bats fell silent, as Charlotte took a 14-4 victory in four innings.

Then, against Brunswick on Sunday afternoon, Buckingham staved off elimination with five runs in the fourth inning to go on to take a 7-2 victory and move into the third round of the double-elimination tournament.

Buckingham's third-day game, scheduled for Monday afternoon against Lunenburg was postponed to Tuesday afternoon at 5 p.m. due to inclement weather.

Buckingham wasted little time in getting on the board in its opening round game against District V champion Charlotte County.

The BC All-Stars put up four runs in the top half of the inning, before things went silent offensively.

Hunter Shumaker, Devin Allen, Harley Gough and CJ Ragland reached base and scored for Buckingham in the top half of the inning.

Charlotte battled back in the home half of the first to cut Buckingham's lead to 4-3.

Buckingham's BJ Gough walked to lead off the second inning, but after that, Charlotte's pitching staff slammed the door on the BC All-Stars by recording the final 12 outs of the game in order. Offensively, Charlotte blew the game open in the second inning with eight runs to assume an 11-4 advantage.

After a silent third inning, Charlotte scored three more runs in the bottom of the fourth to end the contest by the ten-run slaughter rule.

Shumaker was 1-2 at the plate with a run scored, as was Gough. Duncan Sinclair went 1-1.

Solid pitching performances by Harley Gough and Gray Heslip helped Buckingham to victory in its second day contest against Brunswick.

Gough collected eight strikeouts in three innings, while giving up just two hits – one being a solo home run in the bottom of the first.

Heslip recorded five strikeouts and allowed no hits over the final three innings.

Down 2-0 to start the third inning, Buckingham's bats came back to life. The bottom of the lineup started things off. Jeffrey Craft singled and later scored when Cody Smith singled. Christian Williams knocked in Smith to tie the game.

A quick three-strikeout performance by Harley Gough on the mound helped Buckingham sustain the momentum it had found on offense. The BC All-Stars took control of the game with five runs in the top of the fourth.

Allen and Harley Gough walked to lead off the inning, and Heslip reached base on an infield hit. CJ Ragland recorded a sacrifice RBI, and back-to-back hits by Craft and Shumaker (his second double of the day) cleared the bases and put the BC All-Stars in firm control.

“It's all about confidence,” said Allen. “Once they got their heads back up, our bats came alive. I always stress to them that you have to first believe in yourself in order to hit a baseball.”