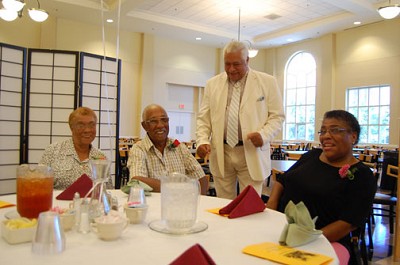 FARMVILLE – This was a senior prom unlike any other.

It was 4 p.m. but they were dressed to the nines.

“What an incredible picture you are. You look wonderful,” said the Rev. Dr. Kitty Smith, Executive Director of H.O.P.E Community Services, which held the event that was scheduled to end at 7 p.m.

“Someone asked, 'Where did the idea come from to do this?' And I confess. I am a romantic at heart. I love happy endings and Cinderella stories. All that sort of thing,” Dr. Smith said to the prom-goers seated at tables, the aroma of baked chicken, rice pilaf and seasoned green beans filling the dining hall like a benediction.

“And I've wanted to do this for more than 20 years,” she told them, the prom program stating, “We honor those individuals who were students in Prince Edward County when public schools were closed from 1959-1964. Many of those students never attended a prom.”

But not one and done.

Not done and dusted.

“This is just a dress rehearsal,” Dr. Smith told them, “because I'm determined it's going to become an annual event.”

And not simply an annual event.

“Eventually we will have the big band,” she continued.

But not only a big band.

“And we will have some guest personality,” she elaborated.

Yet there will be no expense for the band or the personality.

“We won't have to pay a dime because people will know this is such an incredible, incredible gathering,” Dr. Smith explained, “that they will want to be a part of it.”

If you hold it, they will prom.

They will surely prom.

Such largesse was a main ingredient in this year's debut of A Real Senior Prom. The dinner, in fact, was donated. “We want to especially thank Aramark here at Longwood University. I want you to know that they have provided this incredible meal to you, to HOPE Community Services,” Dr. Smith said before the blessing. “They have endured the expense of this…”

A gift that was not at all hard to swallow.

In her blessing of the food, Rev. Sylvia Meadows, of Farmville United Methodist Church, prayed, “even as you bless the bread, bless our conversations and our time of joy. We thank you, Lord, for the dream that has come true this evening…”

Rita Moseley, of Farmville, had never been to a prom before Thursday night.

“That was really nice. I liked the fact of being able to wear an evening gown for the very first time,” she said, thanks to Caryn's Bridals, Formals and Tuxedos. “It was very touching.”

A feeling that was shared.