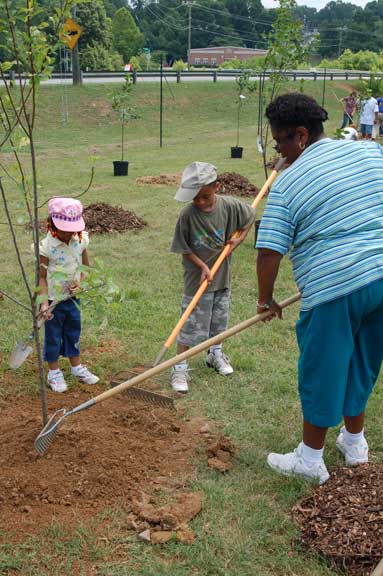 FARMVILLE – Down by Wilck's Lake on a sunny Monday a large crowd of young, old and in-betweeners were hard at work. Shovels pried into the solid ground near the boat ramp on the east end of the lake and rocks, remnants of bricks and lumps of grass were sifted from the soil to make room for some 45-50 fruit trees.

Among an assemblage of volunteers is grandmother Alisa Scott of Prospect with grandchildren Qadira and Xavier Lee, pitching in.

“…Something for the children to do,” Ms. Scott says before adding that they “get bored so quick.”

Grandma is hoping the children will learn how to plant things.

“They're sort of into gardening with their mother,” Ms. Scott says. “So…this is just re-enforcing it, hopefully.”

The children, who were quite involved in the planting process, will always have a connection to the Town and a certain apple tree. In a way, when one plants a tree, it will always be their tree. And, when one touches a project such as this, it becomes part of them.

Farmville, working on the project with The Fruit Tree Planting Foundation, Edy's Fruit Bars and Zynga's virtual game of FarmVille, has something that may just continue to bear fruit for years to come.

“We actually planted an orchard here at the YMCA here in Farmville Virginia and so when we partnered up with FarmVille's game, we quickly…it was kind of no-brainer,” said Julie Lyons, a spokesperson for Edy's Fruit Bars, who was at the site Monday. “We said, 'Hey, wouldn't that be cool if we could go back to Farmville, Virginia and plant another or orchard just to commemorate…the relationship between Edy's fruit bars and the FarmVille game?'”

They contacted the former director of the Y, who in turn directed them to Farmville's Town Manager Gerald Spates.

“…We're happy that we're putting it in this very public place for residents of the Town to enjoy for generations,” Ms. Lyons said. “I mean it's…really wonderful and the Town has been so great and just so gracious and helpful…”

Edy's, she would also note, is really committed to planting fruit trees all over the country.

They have, through their Communities Take Root program that they collaborate with the Fruit Tree Planting Foundation, aim to plant orchards nation-wide. According to a press release, the Foundation, a non-profit charity, is “dedicated to planting fruitful trees and plants to alleviate world hunger, combat global warming, strengthen communities, and improve the surrounding air, soil, and water.”

Up and down the line, volunteers are pitching in. Workers install a fence to keep deer from making away with all of the goodies. Youngsters roll wheel barrels of mulch. Adults chunk away at the hardened ground. Town staff, including Spates and his family, are pitching in, too.

In addition to local volunteers-that also included a group of children from the Y-selected virtual farmers from around the country were on hand to pitch in like Angela Morales, from Houston, Texas, who began playing the on-line game FarmVille in the summer of 2009.

She has planted trees before, but, still, today is a chance to bridge from a virtual farm to help a real Farmville.

“Well, at first I was reluctant to play,” Ms. Morales says of the on-line game. “I didn't want to-I just kept getting all these requests like…invitations to play FarmVille from Facebook and, finally, my mom sent me a request and I couldn't tell her 'No.'”

So, she started playing and, she laughs, it became addicting.

Playing FarmVille is, essentially, like owning and operating a farm. Crops grow and are harvested (with the click of a computer mouse). Players can “earn” fictitious dollars, which they can then use to grow the farm-including buildings. If the crops are neglected, the farm suffers.

“It's the furtherest expansion that you can get,” Ms. Morales says of her farm.

Technically, she has two farms and has grown them to their borders.

Still, though, there is more even for those with large virtual farms to do. There's crop mastery, sheep breeding and pig breeding, crafting from planted crops-plus constant updates.

It's an every day sort of thing.

For Ms. Morales, it's also part of her job; she blogs about FarmVille (farmvillefreak.com).

She also has found it therapeutic, as well. Through her website, she says, she's found people with MS or debilitating diseases.

“…I think for them, especially, it's therapeutic, not just the farming, the people that you meet. They're neighbors and they have this relationship that's great because they give that sense of community that may otherwise be difficult for them to reach out and obtain.”

Brenda Rivera, of New York City, was also one of FarmVille's top players selected to visit Town. She, too, has a full-grown farm and says she plays every day-up to two hours a day sometimes, especially on the weekend.

“I think that's what's great about it,” Ms. Morales adds. “Because it's really how much time you want to invest.”

Before FarmVille, they didn't know about the Town of Farmville.

Then adds laughing, “Only on FarmVille.”

Still, prior to the ceremony, she reflects that it will be something “that I can actually say I planted a tree.”

Both players are interested in seeing what will grow for years to come here.

“It'll be fun to come back and see what we did and see…how big it grew,” Ms. Rivera said.

Ms. Lyons says the players will get a tour of Farmville before they leave. They'll also have a piece of the Town with them as well. They take with them a clock with the logo of the Town.

The fruit, and the real trees, will stay.

The real fruit cannot be sold and must be for public consumption. How it will be distributed will be up to the Town to figure out.