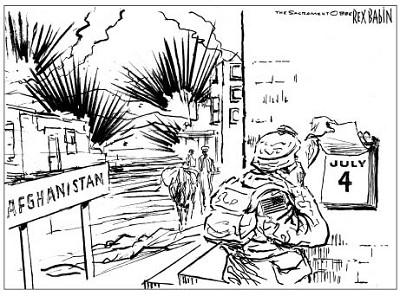 Governor Bob McDonnell will tell you that working with Virginia's inmates to help them successfully transition from prison to a better life after release is in no way being soft on crime.

A year ago we praised the governor in this space for appointing Virginia's first statewide prisoner re-entry coordinator and that initiative is beginning to bear fruit. Modest early steps, perhaps, but vital. The governor recently signed seven pieces of legislation that he believes will strengthen re-entry policies in the state. One of the most effective of those requires the Department of Corrections to create personal trust fund accounts for inmates with 10 percent of any money received by inmates while they are incarcerated, up to a maximum balance of $1,000.

One cannot help wonder why nobody thought of creating such trust funds before. The funds, themselves, will certainly help those released from prison make the transition back into society. And the act of saving, even though the state trust fund accounts are mandatory, rather than based on inmates volunteering to save, can help forge a pattern of positive behavior.

In a press release issued by his office, Gov. McDonnell correctly observes that, “An effective prisoner re-entry plan is good government. It improves public safety, reduces recidivism and victimization and improves the outcome for offenders returning to our communities.

“Everyone deserves a second chance,” continued the former prosecutor and attorney general. “When a crime is committed, the individual responsible must be punished to the fullest extent. If you do the crime in Virginia you will do the time. But when that prison sentence is completed, and the price to society has been paid, we need to take the additional steps necessary to ensure that our prison system is not a revolving door. Currently, two-thirds of those who come out of prison are re-arrested within three years. That means new victims, and more costs to our taxpayers. This is simply not acceptable. We must provide offenders who are leaving our prisons with the tools and resources they need to become productive, law-abiding members of society. We do not want to see offenders come back to jail; we want to see them go to work. That is good public policy that helps the offenders, saves taxpayer dollars and makes our communities safer.”

Full marks to the governor for neatly summing up.

If justice is not imbued with wisdom we do nothing more than construct an all-too-strong foundation for the destruction of more lives. Redemption is possible. Virginia's prisoner re-entry initiative may even make it probable for some. That should be our goal, if nothing more than for our own protection.

Recidivism has a nasty sound to it. Say the word aloud and you can feel the venomous rattle of those vowels and consonants conspiring together to create more crimes and more victims, more lives harmed, perhaps irreparably. Some lives taken altogether.

That fully two-thirds of those incarcerated commit more crimes and return to prison is astonishing and truly frightening. The Department of Corrections should find itself doing a better job of correcting lives-that is, after all, the department's name-rather than simply punishing, alone. A “department of detention” can be too much like a holding cell, a barred lobby or waiting room for those who have broken the law and see no alternative to breaking the law again.

Republican 61st District House of Delegates member, Tommy Wright, of Lunenburg and whose district now includes Cumberland, said, “My bill, now a Virginia law, ensures that offenders will save $1,000, creating a nest egg upon which they can rely when looking to find a home, get a job, and pay for basic needs until they re-establish their place in the community. If we allow offenders to rejoin society with no resources and no way to get on their feet, they are more likely to commit new crimes and return to prison.”

The trust fund accounts will save money but most crucially they possess the potential to save lives.

Without successful re-entry, the orbit of crime becomes perpetual.

But not safely off in space somewhere.

Here, instead, walking up silently and intently behind us.