McDonnell:'Democracy Is Not A Spectator Sport' 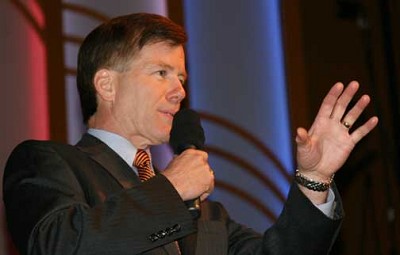 He spoke to the representatives, who were chosen from their schools across the Commonwealth participating in the weeklong civic learning experience, about the state's economy and the importance of continuing their education after graduation.

“Democracy is not a spectator sport,” he advised those at Girls State. “In other words, you can't keep your country great by sitting on the sidelines. Every one of you has unique guidelines that make you different from the person sitting beside you. Every one of you has some role, some issue, or some dream, some aspiration, some appointed duty in your life that's going to make our state and our nation better. You've got to stay involved. You've got to participate and you've got to care about your government.”

Governor McDonnell noted that there are real challenges facing the state in the future, as well as the country.

“We've got unemployment at nine percent (nationwide),” he said. “We've got real challenges in any number of things. Energy independence and things like that but we do have the most innovative and smartest and entrepreneurial people in all of the world…I'm confident we're going to overcome that again.”

Virginia's budget is $40 billion a year, he added. Which is actually down from 2009 when it hit its highest level and the state currently has approximately 100,000 state employees.

Virginia's unemployment rate is at 6.1 percent-the third lowest east of the Mississippi River.

“I get up every morning and think that I've got 250,000 people who can't find a job,” said McDonnell about the state of the economy. “It's just heartbreaking and I've heard a lot of the stories and I get a lot of emails. That's one of the toughest things about being governor is that you know there are people that can't find work and can't take care of their families and that have to rely on the government or food stamps or welfare…We're trying to do everything we can to create those opportunities in the short-run or the long-run to get them back to work.”McDonnell said his office is focused on job creation and economic development but “it's really the private sector that creates the opportunities.”

Last year, spending was reduced in the state's budget “back to 2006 levels,” explained McDonnell before addressing the $6 billion budget deficit.

“We reduced the spending a little over $3 billion and made some other adjustments to reduce the budget and as a result of that we ended up with a surplus last year and the end of the fiscal year is coming up on June 30…and we'll end it with another surplus,” he said.

He described that the surplus money could be put back into things like transportation and education.

During McDonnell's comments, he asked the girls to raise their hands if they had plans on attending college.

The auditorium was full of hands raised high and McDonnell noted that tuition in Virginia has approximately doubled.

McDonnell explained that earlier this year a higher education reform bill was passed requiring state colleges to keep spending down and to expand their acceptance of in-state students.

“Only 42 percent of the young people in Virginia can actually go to a Virginia college or a community college,” said the Governor. “Because that's all the spots that we've got.”

He's set a new goal of 100,000 new degrees over the next 15 years “so more people like you sitting in those seats…can get a better education,” he said about the new degrees in science, technology, education, math, healthcare, engineering, and business.

“These are the things that are going to drive the new economy. There are so many things happening out there between the Internet and social media and technology journal and the opportunities are limitless especially in northern Virginia,” he added.

McDonnell also said the focus would also be on graduation rates of these disciplines so that “better opportunities could be provided for all young people.”

Time soon came for questions, and only three were asked from the Girls State delegates due to the time constraints of the Governor's schedule.

The first question was related to the November elections that are approaching.

According to McDonnell, the Senate race is “politically hot” right now due to the number of Democrats (22) and Republicans (18) and the entire House is also up this year as well, he noted.

Another debated item that was just wrapped up was the redistricting of the state, added the Governor.

He also mentioned the primary that is set for August 23.

“Politically that's the issue,” he said. “But…policy it's almost always the budget.”

Another question was asked from a Girls State delegate from Amelia County.

He later described that the state has reduced spending and has had a 17-month hiring freeze.

The last question was posed from a delegate who lives in the Woodbridge area of northern Virginia.

Her question was related to affordable healthcare.

“I'm from a working middle class family and we do have healthcare,” she said. “But some of my friends in school don't and some of my neighbors don't. Do you have a plan to make it more available for those who currently don't have it?”

Governor McDonnell addressed how the healthcare debate is one of national concern and how he believes the goal is related to “great access.”

One in six people don't have healthcare, he said about it not being a “quality issue” but one of access due to cost.

“I support what he is doing,” concluded Governor McDonnell about Virginia's Attorney General Ken Cuccinelli and the state's case against the federal healthcare legislation.