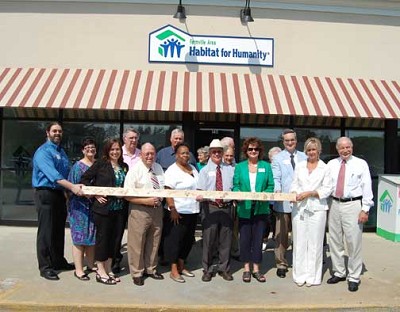 FARMVILLE – The Farmville Area Habitat For Humanity and the USDA's Rural Development signed a memorandum of understanding (MOU) Wednesday that will expand housing opportunities offered by each and the pool of potential homeowners.

“Yes, for both of us,” Anne E. E. Herring, Area Director with the USDA's Rural Development office in Lynchburg, told The Herald.

The partnership, Ms. Herring explained following the memorandum signing ceremony, “will bridge the gap between the traditional clientele that Habitat's been able to serve…and our direct lending program, which is 100 percent financing to rural Americans of either a very low or low income category.

“So this will help them to be able to purchase more. It will be able to help Habitat sell more and hopefully bridge that gap together so our folks will be able to purchase, in many cases, a lower priced home,” she explained, “and Habitat will be able then to generate that much-needed revenue to keep their program going, so they can build even more houses and expand out of the immediate area where they seem to have concentrated. So we're real excited about it.”

The coverage area for the MOU will be Farmville, Prince Edward County, southern Cumberland, Buckingham and Charlotte Counties.

Ms. Johnson attended a training session that highlighted Habitat-Rural Development teamwork and “it peaked her interest and we began talking, probably over a year ago,” Ms. Herring said, “and we kept on talking and kept on talking and it's culminated into today.”

Ms. Johnson reflected on the meaning of the USDA-Habitat partnership, saying, “each USDA-Habitat home increases the financial capability of the affiliate, meaning that more homes can be built, more homebuyers can be served and rural communities can become more stable.”

As the pens were being readied for Wednesday's MOU signing, Farmville Area Habitat For Humanity Board President LeAnne Emert noted that June is National Home Ownership Month “so there's no better time to announce the partnership between USDA Rural Development and the Farmville Area Habitat For Humanity. We're two organizations that want to help make more homeowners in our community and our goal is to provide affordable housing. And so it's nice to have a partner in this.”

Among those attending the MOU signing was Paul Hoffman, field representative and Farmville district office manager for Rep. Robert Hurt, who read a statement from the congressman.

In her remarks as part of Wednesday's ceremony, which was attended by Farmville Area Habitat For Humanity volunteers and board members, USDA representatives, and Prince Edward County officials, Ms. Herring noted this year's National Homeownership Month theme is “rural housing-rural jobs. And on behalf of the Obama Administration and our State Director Ellen Davis, who couldn't be with us today, we again welcome you and are happy for you to come celebrate with us our partnership this morning.

Remarking on the “rural housing-rural jobs” theme, Ms. Herring said, “everybody thinks about jobs but what does that mean for the rural parts of America such as this? The National Association of Realtors tells us one median house price, one sale at that price, generates $30,000 in economic activity…It's lumber. It's paint. It's furniture. It's other purchases in the Habitat store. It's realtors. It's bankers. It's Habitat folks, like us. So the domino effect of what rural housing generates is much and of course that does so much to stimulate the economy in rural America, which is obviously what we need.”

For 60 years, she continued, Rural Development has been in the housing business, generating homeownership opportunities.

“And our new partnership with Habitat will just help us,” she said, “expand on that and grow that into the future in the areas that they serve. So thank you so much for being willing to partner with us and we're excited as we bridge the gap between our two programs and do much together.”

Though Rural Development State Director, Ms. Davis, was unable to attend she did send a statement on the MOU and the partnership it will create.

“We have had great success with our partnership with Habitat in other regions of the state and I am so happy that the Farmville region,” she wrote, “will soon be onboard and be able to utilize our home mortgage program.”

Sylvia Hallock is Special Projects Manager for Habitat Humanity Virginia and explained in a statement released to the press that “even though the two organizations are very different in many ways, they share the common mission of providing affordable home ownership to families across the state. Each agency has found creative ways to forge a successful partnership.”

Or, as Ms Davis put it, “It is a strange marriage, but we make beautiful children together.”