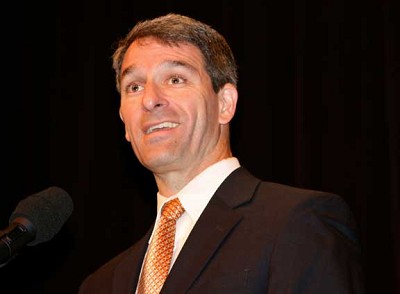 PRINCE EDWARD – Virginia's Attorney General Ken Cuccinelli has taken on federal attorneys in court. On Tuesday, he visited Girls State and detailed the aspects of his office and duties, but also waded into what could be his signature litigation-a state challenge to the new health care law.

Ordinarily, Cuccinelli cited, federal law trumps state law except when that federal law is unconstitutional “which is what we say the health care law is-specifically the individual mandate that orders (people)…to buy health insurance against their will.”

He noted that we haven't had this much federalism tension between the state and federal governments in about 50 years.

“And when you go back 50 years, it was the civil rights era where Virginia was one of the worst states in denying African American citizens their rights under the 14th and 15th amendments and it was the federal government that checked state power at that time,” Cuccinelli said.

He offered that it goes both ways.

One of the Girls State participants asked about the next step in the debate over “Obamacare.”

He explained that they won in December at the district court level and that the case is at the appellate court level now. They argued the case on May 10, did some supplemental briefing a couple of times, and now they're waiting for an order from the three-judge panel.

If they lose, Cuccinelli said, they will appeal to the Supreme Court and he speculated that if the federal government loses, they would ask for an “on bond review” which is essentially an appeal from the three-judge panel to the 13-judge court.

“…Whoever loses there is gonna ask for an appeal and we're gonna end up at the Supreme Court probably with our sister states,” he said.

He offered, “I am convinced this will end up in the Supreme Court. They will decide it. My guess is that they will decide it next June, 2012 and the reason I guess that month is because their term runs from October to June and they issue their most charged or controversial or difficult opinions at the end of the term-that means June.”

One speaker noted that the lawsuit regarding patient protection and affordable care has generated a lot of media and made the attorney general a bit notorious. She asked if he thinks he will run for Senator or President because of the attention he has received.

“No,” Cuccinelli said, to laughter.

He would explain they decide to bring cases because it's right on the law.

Another speaker asked the Attorney General why he believed the health care bill is unconstitutional and why it does not fall under interstate commerce.

The federal government, Cuccinelli explained, has claimed under the Constitution they have the right to regulate interstate commerce.

“…Our perspective is, in this legislation, they aren't regulating existing commerce that you have decided to engage with. They are ordering you into commerce. They're ordering you to buy a product. That has never happened before in the history of this country under the guise of regulating commerce. The federal government has never ordered people to buy anything,” Cuccinelli said.

The Attorney General reflected on an example in history-where American colonists were boycotting British goods for the ten years before the war to try to get them to repeal the Stamp Act and the Intolerable Acts.

“…The Attorney General for the King and the Solicitor General for the King served by tradition in Parliament,” Cuccinelli recounted. “And the question was asked, isn't this boycott treason? And they gave a very interesting answer. They said that it was close to the line, but that the colonists were within their rights.”

He added, “Flip that coin over. What that means is, they were acknowledging that King George III and the Parliament of Great Britain, that we rebelled against as tyrants, acknowledged they didn't have the power to order American subjects of the King to buy a British product. But we've a President and a Congress that thinks they can. That's how extraordinary historically the…attempted exercise of this power is.”

Cuccinelli noted that “for us to win” the Supreme Court doesn't have to change any law; for the federal government to win, he added, “The Supreme Court has to stake out a new outer boundary for the commerce power.”

If they can do that, he suggested, they can order you to buy broccoli or a GM car.

The case, he offered, is about liberty, not health care, and Cuccinelli said they are literally arguing the foundation of the Constitution in this case. If the federal government can order us to buy products, the powers left to the states under the tenth amendment have been gutted-federalism is dead, he suggested.

Cuccinelli, who has five daughters and two sons, encouraged the participants to take charge of setting their goals, pursing them themselves and making their own future.

“Part of being able to do that is to understand the various paths that are open to you and by…making choices that open more rather than close off options,” he said.

Cuccinelli detailed some specifics of his office, detailing that he likes being a lawyer, that he finds it intellectually stimulating and that it is interesting work.

He noted that he now manages the fourth largest law firm in Virginia, that they have over 300 attorneys on staff, and are the council to every agency in Virginia including Longwood and universities across the Commonwealth. His most important client, he offered, is the governor; and he also provides legal advice to the General Assembly and state agencies.

Cuccinelli noted that he also has public safety responsibilities; that he fights health care fraud (the biggest section in his office and the only one that has grown 50 percent in a year and a half), fights child pornography computer crime, works to protect elderly from abuse, and those who are incapacitated and unable to care for themselves. He also cited efforts to fight gangs-trying to keep people from making choices that lead them into gangs and, if they make those choices, try to prosecute them.

He also outlined the oath of office is to protect the Constitution of the U.S., state constitution, and the statutes of Virginia.

“All of that is in order to protect the people of Virginia and their liberties,” he said.

In issuing legal opinions, he noted, they aren't “Ken”s opinion,” but are formal analysis. They are not his personal opinion, but are “our best estimate, in my office, of what a Virginia court would say the answer to that legal question is. And, so far, no court in Virginia has disagreed with any opinion that I've issued.”

Cuccinelli also detailed that he has issued opinions where he doesn't like the policy. One of his first, he detailed, was whether you can stick fees and taxes into the budget bill without a separate piece of legislation. While he says he fought “this like crazy” when he was in the State Senate, he noted he had to sign off on an opinion “that said you can do this. And I don't like it at all, but that's what the law says. And my fidelity is to the law first when it comes to those sorts of convergences of my personal opinion and the legal realities of Virginia.”

A second example Cuccinelli cited involved second amendment rights. The Alexandria Waterfront Festival, put on by the American Red Cross. The question was whether the Red Cross exclude legal citizens from carrying weapons at the event on public property. The answer, he cited, is yes.

“I am a strong supporter of concealed carry and those kinds of things. However, that is not the government blocking your ability to carry,” he said. “It's a private entity running their own event. Even though it's on public property. And you could just guess what my second amendment supporters thought about that. They didn't like it, but that's what the law says. So it put me in a difficult position politically, but my fidelity, again, is to the law.”

Cuccinelli also encouraged Girls Staters, as they look ahead, to at least keep it as an option to participate in politics. He also noted that in his 2003 state Senate election he had three top precinct captains, two of whom were too young to vote. One was 17, he cited, and another was 15.

“Each of those folks was worth about a hundred votes for me in that election in their precinct and they couldn't yet vote,” he said. “So don't think you have to wait.”

There are things, he reminded them, they can do.

He noted that “we need people, men and women, to step forward and to lead their communities in a variety of ways and service in politics is one of them. And I would urge you all to keep it as an option in your life. That doesn't mean you have to do it tomorrow, but being here alone is preparing you for it.”

Cuccinelli was asked what he thought was the hardest part about being Attorney General, he cited getting around and staying in touch with all the different parts of Virginia and, on a personal level, being away from home.

“…If I'm in China or I'm in Farmville, it doesn't matter if I'm not home,” he said. “What maters at home is that I'm not home. And I like going home.”

On a personal level, he cited, the hardest thing is that it takes a lot of time away from family and “that's a major cost. It's, in my view, the biggest cost in doing this job. And campaigning is hard. I enjoy it, but my race was 20 months long…”

Still, he noted, that was a relatively short race by historical standards. He noted that he didn't get to stop practicing law, had to keep working and doing everything else at the same time. He noted he learned to practice law from the seat of a car. He cited that with the invention of the I-Pad he can now do remotely from his office “literally everything that an AG has to do with the exception of live human contact. And none of my predecessors had reached that point of technology, but it's very beneficial from my perspective.”

In a portion of a response to a question, Cuccinelli said he “will run for office again-it may be for re-election…in 2013, it may be for something else.”

Asked, if the President's healthcare law is found to be unconstitutional, about his view of health care reform, he noted when he was in the Senate, one of the bills he proposed was to allow Virginians to buy insurance across state lines (which is currently illegal). Reflecting on data when he did the bill (about two years ago), he cited that their border states-except North Carolina-all have lower health insurance costs per month.

“There is no one silver bullet to this challenge,” Cuccinelli said.

He cited tort reform (though he noted Virginia has very good tort law), health insurance issues-citing that 30-40 percent of all dollars in healthcare go to administration which he cited was “horrible.”

He would later offer that he really wants to make it more available to more people, but that government “in many respects, gets in the way of that. So there are things we can do, but none of those changes are gonna happen until this lawsuit is resolved.”