Bolling Favors All Solutions On Energy And Teen Pregnancy 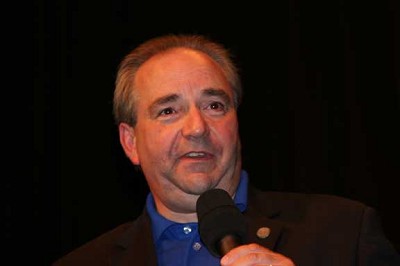 One size doesn't fit all but all available sizes may fit as contributing solutions, according to the 54-year old expected to run for governor in 2013.

Responding to separate questions on energy and teen pregnancy while speaking at Girls State on Wednesday afternoon, Bolling eschewed the view that there is one and only one solution to either of those challenges.

“All of the above,” he told the rising high school seniors gathered for the 65th annual event.

“We also support expanding renewable and alternative sources of energy. We have programs in place today to help Virginia do better in the area of wind. Particularly offshore wind. I think we have tremendous potential there in the area of solar, in the area of biofuels. There are very creative biofuel projects taking place in our state today,” Bolling said, before giving an example.

“I met with a company just last week who were trying to get up and running in Hampton Roads that has the ability to intercept 100 percent of the waste stream for Hampton Roads and use it to produce ethanol-based energy. And by doing that they can take 95 percent of that waste stream and divert it from landfills and turn it into ethanol-based energy. That's a wonderful project with a tremendous amount of potential.

“So, we support traditional,” he said, checking one solution box.

“We support renewable,” he added, checking the other box on the multiple choice list.

“The comment, though, I would make to you is that renewable sources of energy, as valuable as they can be-wind, solar, biofuels, whatever the case may be-will certainly not in my lifetime and probably not in your lifetime replace traditional sources of energy.

“It's not going to happen,” he declared, before criticizing the position of those who believe traditional energy sources can be effectively phased out now, or in the near future.

“A huge percentage of our energy production today is still oil and natural gas and nuclear and we're not going to replace that in whole or any significant part during most of our lifetimes,” he told the packed and renovated Jarman Auditorium. “And that's why we believe so strongly it just can't be one or the other. To those who say 'all traditional but no renewable,' that's wrong. To those who say 'all renewable but no traditional,' that's wrong.

“It has to be an all of the above approach to really give us the type of energy mix I think we're going to have to have,” concluded Bolling, who is the first lieutenant governor to be made part of a governor's cabinet.

That same “all of the above” approach is the compass for Bolling's journey to solutions to address teen pregnancy.

“I think that it's not just teen pregnancy but unwed pregnancy is one of the major cultural and social challenges that we have in society today,” the lieutenant governor said, recalling a 2010 report but not the precise statistic on unwed motherhood in the City of Richmond.

“It was something like two-thirds of the children born in the City of Richmond were to unwed mothers. Two-thirds. Now, of those two-thirds I don't know the percentage but I would venture to say a large percentage of them were probably teenagers,” said Bolling, who is serving his second term as lieutenant governor, following a stint on the Hanover County Board of Supervisors.

“Teenagers are not in a position to have children and care for children responsibly and that's the reason we need to do everything we can to reduce the number of teen pregnancies. And I kind of take an all of the above approach to that,” he said.

“Sometimes we get wrapped up in, well, should we encourage abstinence-only education? Should we encourage birth control? My answer to that pretty much is whatever works that's what we should be (teaching),” said Bolling, who has been tasked by Gov. McDonnell with job creation in the Commonwealth.

“Because this problem is just so bad and the teen pregnancy problem, the unwed pregnancy problem, is so bad right now that when you think about the ripple effects that has on the lives of the mothers, on the lives of the children, overall, many times on their ability to get the education they need to prepare themselves for the rest of their lives, it is a major cultural and social problem in our society.

“So whatever works,” he reiterated.

“I mean, whatever works,” he re-emphasized. “Because I think we've got to take an all of the above approach to be able to really reduce those numbers. And that's what we're trying to do. We're trying to approach it kind of from every different angle.”