'A New Chapter And A New Day' 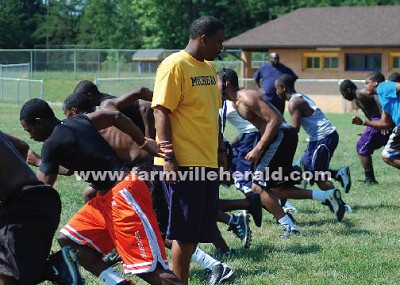 FARMVILLE – As new Prince Edward County High School varsity football coach James Ford looked at who had come for the volunteer conditioning and weight training workouts on Monday afternoon, he liked what he saw.

The numbers, a little over 20, may have been a touch lower than he would have preferred, but a large portion of them were upperclassmen. For a program that has won just two times over its last 20 contests, it was as refreshing as a cup of cold water on the 90-degree day.

“I'm glad to see this,” said Ford, who coached the junior varsity last season. “It shows that there's a commitment with our upperclassmen toward turning the program around.”

Ford has a vested interest in the football team at Prince Edward. He's a 1999 graduate of the school, and was a three-sport athlete in football, basketball and baseball.

He moved to Farmville from New York in time for his sophomore year, and was originally a wide receiver with the Eagles.

“It's a funny story,” said Ford. “I was a receiver in my junior year, and sometime in the summer, I learned by reading The Farmville Herald that I was going to be at quarterback for my senior year.”

After graduation, Ford went on to Wingate University before finishing his college education at Averett.

On the surface, it doesn't make sense to go back in-house for the program if it wants to move in a new direction, but his youthful enthusiasm, coupled with his love for a school that gave him a diploma, may be what the football program needed.

And he's not lacking enthusiasm.

“We're going to be respected in both the school and community. The expectations are going to be high. An emphasis will be put on getting good grades and being good citizens in the classroom. On the field, a big determining factor in deciding playing time will be who gets to practice on time, and who has learned their assignments. But most importantly, they're going to be good citizens.”

Ford's junior varsity squad was 3-6 in 2010 with a roster just big enough to field a team. Small numbers of upperclassmen on the varsity, combined with a number of eighth graders that chose to play for the middle school team didn't help the JV Eagles numbers-wise.

“The guys played hard, but as the game went on, you could see where fatigue would set in. We were in a lot of games until late in the third quarter or the fourth when the kids just tired out.”

One thing Ford knows is that Prince Edward is always going to have athletes.

“Even in down years, we're going to be athletic. We've got to combine that with discipline. That's knowing your assignments and being able to trust the guy beside you to do his job. We can be successful – even in the first year – if we can trust one-another.”

Ford admits that it's easy to talk about it in June, but getting into practice in August and as the season goes on will be the challenge.

“We can't give up the big play on defense. If you go back to last year's film, there were a number of games that came down to a play or two. A lot of times, it was because of missed assignments.”

Ford said that he feels that team is best suited to run a bend-but-don't break philosophy on defense.

“Most high school offenses will make a mistake in a drive. We've got to keep them out there long enough to make that mistake, and then capitalize on it when they do.”

With that in mind, the offense will look to score quicker.

“Right now, we're looking to run up-tempo and to put as many athletes on the field as we can. We've got to use our instincts and not think too much. It's going to be even more important to be disciplined and to know our assignments, but once we get that down, we've got to be confident enough in our preparation where we can use our athleticism to our advantage.”

It's going to be a tough road for the Eagles, but Ford said that the team will be doing everything it can legally do in order to get ready for the season. He's already taken several linemen to a camp in Richmond, and PE will be participating in a number of seven-on-seven camps in the summer.

<!– 1upcrlf2 –>”We can't really install anything right now, but we can make things as easy as we can once August rolls around. I was impressed with what we did at the line camp, and I think we can get something out of the seven-on-sevens that will help us. We'll also try to get into some team camps as well. We've got to take advantage of everything we can right now.”

At the L.C. Bird Big Man Camp, Virginiapreps.com reported that PE rising senior Tyrek Goode was one of the top defensive linemen at the camp, and rising junior Isaiah Davis was named the Sleeper Prospect of the Camp. Prince Edward was the only non-AAA/Central Region school represented at the camp.