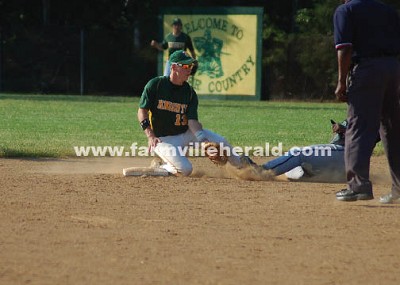 Perhaps the Knights were too aggressive in their 6-3 loss.

Buckingham's impatience at the plate helped ease the task for ACHS pitcher Dillon Weaver who seemed to stay ahead in the pitch count all evening.

“We talked about being aggressive today,” said BCHS head coach Mike Jones. “You have to be aggressive, but at the same time you've got to be smart. We swung at a lot of pitches we shouldn't have, and were in a hole much of the game.

Buckingham starter Landon Allen gave up a solo home run to Josh Tasker in the bottom of the first inning, but pitched effectively into the fifth before tiring.

Buckingham scored all three of its runs in the top of the fourth inning on some aggressive base running.

“We were going to be aggressive on the bases, no matter who was on,” said Jones. “We wanted to make their defense uncomfortable.”

Other than that, BCHS was unable to get much going offensively. Their offensive woes came back to haunt them in the bottom of the fifth. Amelia's hitters adjusted to Allen's pitching, and chased him from the game with one out in the inning. Still clinging onto a 3-2 lead with two on, Layman came on in relief, but the Raiders had gained the momentum. A two-RBI single by Amelia's Anthony Wojno put ACHS ahead for good.

Buckingham threatened in the top of the seventh, and had runners on second and third with the tying run at the plate, but Weaver recorded the final out on a strikeout to knock the Knights from the tournament.

Amelia was scheduled to play at Randolph-Henry on Thursday night for the JRD Tournament title.

However, the season is not over for Buckingham. The Knights will likely earn one of eight spots in the Region B, Division 2 Baseball Tournament, scheduled to begin next Monday at a time and place still to be determined. Should the Knights qualify, the game will likely be on the road.

“That's the good thing,” said Jones. “It's probably not over, and we'll approach the rest of the week like it's not over, and prepare for whatever lies ahead next week. In baseball, as long as you still have an out, you're still alive. If we're able to play next week, we'll be prepared to make the most of it.”

BUCKINGHAM – The Buckingham County High School softball advanced to the James River District Tournament finals with a 6-3 victory over Randolph-Henry on Tuesday afternoon in Buckingham.

The Lady Knights were led by Elynn Lee, who was 3-3 with an RBI and two runs scored, as Buckingham jumped on the Lady Statesmen early and held on for the three-run victory.

BCHS (13-4) scored in each of the first four innings (one in the first, two in the second, two in the third and another in the fourth) to build a 6-0 lead.

Randolph-Henry scored a run in the fifth on a passed ball and two in the sixth on a two-run home run by Alli Roberts to cut the lead in half, but Buckingham senior pitcher Libby Morris was in control for most of the afternoon, as she tossed a three-hitter and recorded 16 of the 21 Randolph-Henry outs by strikeout.

Buckingham was scheduled to travel to Central of Lunenburg on Thursday for the JRD Championship game, and will host a Region B, Division 2 Quarterfinal game on Monday afternoon at a time and against an opponent still to be determined.