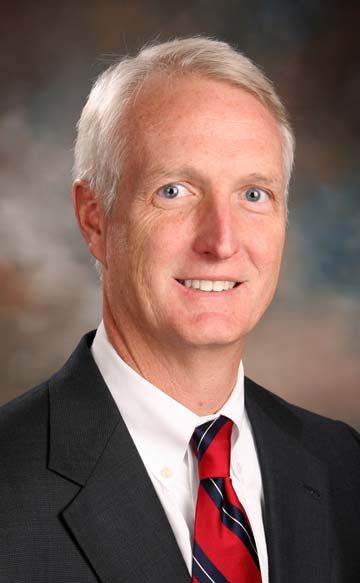 LYNCHBURG – Mark Peake, of Lynchburg, announced his candidacy Monday for the Republican nomination for the State Senate from the newly created 22nd District.

Peake and his wife, Lila, are parents of five children, including quadruplets who are 14 years old and also an 11 year-old.

He is an attorney with Caskie & Frost of Lynchburg, and has been in private practice for over 20 years. By appointment of Governor Bob McDonnell, Peake serves on the Commonwealth Transportation Board. He has served for six years as chairman of the Lynchburg Republican City Committee, and he also serves on the State Central Committee of the Republican Party of Virginia.

In announcing his candidacy, Peake said that, “As a conservative Republican, it goes without saying that I am committed to the limited reach and efficient administration of our state government. On the whole range of issues that come before the State Senate, I would cast my votes to keep taxes low and to protect our rights. On all of the key issues of state government, from spending to the Second Amendment, from the economy to education, and from healthcare to welfare, I believe in the conservative principles of limited government, lower spending and a belief in the free enterprise system. Government should focus on its core services. ”

Peake said that, “We continue to pass through deeply troubled economic times in Virginia. Whole sections of the Southside, including much of the 22nd District, have been hammered, and hammered hard, by the recession of recent years. Largely thanks to a Republican House of Delegates, and now thanks to the leadership of Governor McDonnell, Virginia has held the line on both taxes and spending. Cutbacks by the Commonwealth have been far less severe than those required by other states. The private economy is slowly recovering, and state revenues are modestly on the rise.”

“But there- remains much more to be done. Many of the economic policies of Governor McDonnell have been passed by the House but stymied by the Democrat-controlled Senate. The new 22nd Senate seat may very well tip the balance of power in the Senate, paving the way for increased cooperation between the branches of government precisely when cooperation is what we need most of all. What's more, the declining population of Southside means that more and more political clout is shifting to northern Virginia and to Tidewater. I want to work to ensure that Lynchburg and Amherst and the Southside, as well as rural Goochland and Louisa, which together compose the new Senate district, have the energetic, conservative representation we need to make sure that our interests are heard-and heeded-in Richmond.”

Peake is a graduate of Virginia Tech and earned his law degree from Washington & Lee University's School of Law.

Abbitt Retires: All Downstream From Here