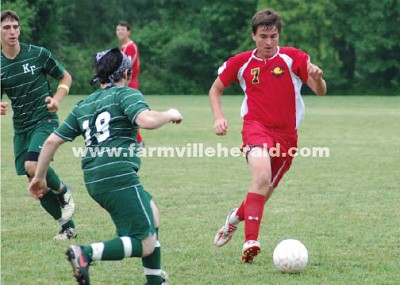 FARMVILLE – The Fuqua School soccer team was peaking at the right time in the Virginia Commonwealth Conference Tournament, but as was the case all season, regular-season champion Kenston Forest still held the higher ground.

The Kavaliers capped what was a dominating season against their VCC competition with a 6-0 victory over the Falcons in the tournament title game.

“We knew that if we were going to win, we needed to play our best game of the season,” said FS head coach Ben Pleasants. “Unfortunately, it wasn't enough.”

The match wasn't really close. The upperclassmen-heavy Kavaliers scored three goals in the first half and another three in the second, and substituted liberally in both halves.

Fuqua had its chances to get on the board, but Kenston Forest did a good job of disrupting the timing on most of the Falcons' offensive runs.

Even after the loss, Pleasants couldn't find fault in his team's approach to the tournament.

“We played great this week, and it was a testament to their dedication to get to this point.”

Fuqua had entered the tournament as the sixth and final seed, and defeated No. 3 Brunswick Academy 4-2 on Monday in Lawrenceville and No. 2 Isle of Wight on Wednesday in the tournament semis at Fuqua to set up Friday's title game at Fuqua.

Needless to say, the Falcons were motivated.

“I think that sixth-place seeding really helped to bring the team together,” said Pleasants. “The captains pushed everyone, and kept them motivated. Their leadership was special.”

Team-building doesn't always mean practice. Even if it's championship week.

“On Tuesday afternoon we played ultimate frisbee. We needed to work on our communication. I'd like to think it helped us on Wednesday [against Isle of Wight].”

“Mahlon showed why he's Player of the Year. I'm definitely proud of him.”

Though the Falcons won't lose a lot to graduation numbers-wise, they will have to replace Felton in goal.

“There is great potential for this team next year. A lot of core guys are coming back, but it's going to be tough replacing the goalie and sweeper. But I saw a lot of growth in the underclassmen. Especially along the defense. For much of the year, our defense would just get the ball out of there just to get it out. But they've started to look for our players instead of just kicking the ball down the field or out of bounds.”

The team will have to continue to develop without Pleasants. He just completed his senior year at Hampden-Sydney, and will no longer be in the area.

“I hope to keep coaching,” said Pleasants, who was an athletics standout at Blessed Sacrament-Huguenot in high school. “This is my first varsity team, after coaching the JV last year. I've sure learned a lot from them, and I hope I taught them something.”