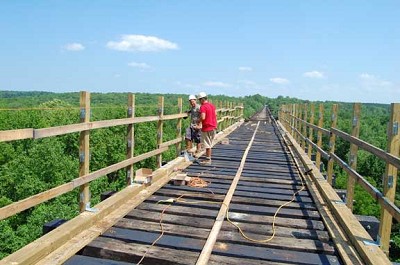 FARMVILLE – When the trees leaf next April, High Bridge will have arrived to highlight the state park bearing its name.

“The contractor's time-line right now has got it finishing around the first of February,” the park's manager Eric Hougland said during an interview last week, “but then that doesn't figure in any possible change orders or problems they might run into.”

“We're pushing them hard to be done March-ish,” Hougland said on the way to visit the construction site, where work has been underway for about three months.

“As far as a percentage of how far it's complete, probably about eight percent,” he said. “It's starting to take shape and you can see what it's going to be.”

What it's going to be is a spectacular eight football fields-long walk above the treetops and over the Appomattox River Valley.

“It's a 2,400-foot long bridge so it's going to take a long time,” he said of construction, embracing a logical, practical approach to what will be the equivalent of the park's Christmas morning when the bridge is open. Good things take time and safely converting High Bridge into an elevated trail for hikers, cyclists, and horse enthusiasts necessarily calls for a pace that will achieve the safety-first goal.

“They haven't even gotten to where the overlooks are going to be…We're pushing three months of them working on it and wanted to get an update to the public of what's going on,” Hougland said, explaining why he called The Herald for a status-reporting news story.

The work being done by Keith Barber Construction Inc. is of an astonishing magnitude. The construction had progressed 200 feet out on the bridge at our visit, so there was 2,200 feet of construction left but the opening of the view was mesmerizing.

In addition to using approximately 33,000 screws, notes Ian Brock, vice-president and project manager for the construction firm, the work will see over 900 timbers being replaced.

And not just any timbers.

Each and every timber is a special order and is specially and specifically cut for the High Bridge project.

Oak trees are hand-picked and then felled in Georgia to meet specifications for the bridge.

Then those trees are shipped to North Carolina where notches are cut with absolute specificity.

“The timbers go in a specific order. These notches that are cut, see how they're a different depth?” points out Hougland. “There's actually a schedule we were able to get from (Norfolk Southern) that's called a dapping schedule that identified how deep the notches in each timber needed to be to give you a relatively level surface to start with.”

After the notches in the Georgia oaks are cut in North Carolina the wood is next shipped to West Virginia where the wood is treated.

Only then are the timbers shipped to Farmville and then High Bridge.

“The contractor did what he could while he was waiting for materials,” Hougland said, applauding the construction crew. “The bridge timbers had an eight-week lead time actually getting them on site so the approach works, the retaining walls…he basically did what he could until he got those timbers in.”

There is a comfort level between Keith Barber Construction, Inc. and High Bridge Trail State Park, and experience.

“The lowest qualifying bid got the job,” Hougland said, “but we're glad to see a local person get it, especially since they did the work on the other five bridges on the park, as well. We're familiar with each other.”

In this case, familiarity breeds respect.

The bridge will have a total of three overlooks. Two will come up off the railroad bridge's steel towers.

“You know how the bridge is offset with the steal towers. Those will be nice large platforms. I think they're 20 by 40 (feet) and they'll actually have a little roof structure so you can get out of the sun,” Hougland enthuses.

“Then on the opposite side there will be one in the center that is cantilevered, that won't be as large, but will get you closer to the original brick piers to be able to enjoy those,” the park's manager continued.

“They're going to give us places to do interpretive signs, to stop and enjoy the view. But also a place, for example, if someone's coming through with horses-and we'll require people to dismount and lead their horse-but, say you don't want to be around those horses, it gives you a place to kind of get away from them.

“Or if there's a big group coming through it gives you a place to pass,” Hougland said.

Even just two hundred feet out, once past the trees, the breeze is most noticeable and appreciated in the late May, July-feeling, humidity.

The construction crew can't wait to get further out to have nature's air conditioning turned up even higher.

The trail on the bridge will have an extra bit of width to it. Eight feet is the minimum on two-way trails “and ten is just a little bit nicer,” Hougland notes.

In addition to the wooden railings, a vinyl-covered chain link fence with one-inch openings will be used from the decking to the top of the handrail, five feet up from the decking.

“The biggest opening you're going to have at five feet is one inch,” Hougland points out, “so there shouldn't be any accidentals (falls).”

And, he adds, “we're actually six inches above the federal minimum, which is 54 inches and we've got 60.

At the overlooks, however, the fencing will drop down to 54 inches.

“We trying to give people a better view,” Hougland said. “It's a design we've used at New River Trail (State Park, also a rails to trails) and on the other wooden bridges here and it's worked well.”

Next spring, it will get a chance to prove it.