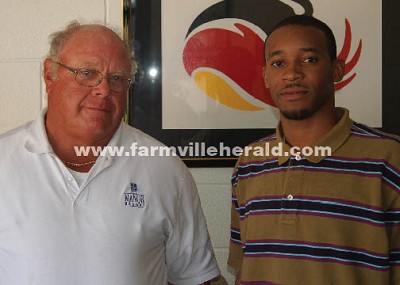 FARMVILLE – If someone could go back in time to visit a teenage Marcus Gregory to tell him that he would one day be named Assistant Athletics Director for Basketball Operations at Fuqua School, it may have drawn a laugh.

But it surely wouldn't have drawn a second thought.

Gregory was a standout guard on the Prince Edward County High School basketball team. In his mind, there were too many differences between him and how he saw Fuqua. He didn't want to go there, and he was sure they didn't want him.

Maybe he was right at the time, but Gregory, who went on to star as a point guard at Hampden-Sydney, has learned a lot of lessons since then. One of them is admittedly cliche.

“Never say never,” said Gregory, who was also named the Falcons' varsity boys head coach. “Never in a million years, would I have imagined I would end up here. You don't know what path God is going to take you down.”

“It's more a question of why not,” said Gregory. “I know it will catch a lot of people's attention, but I feel it's a great place to be now. It has great academics for kids in the area. I hope I can open some eyes and show that there are some different options for students that are wanting to take their athletic talents to the next level, while they also work on strengthening their academic standing.”

Going against the grain is nothing new for Gregory, who coached the varsity team at Cumberland High School last year, and prior to that was a part of the program on the middle school level. Given the rivalry between PECHS and Cumberland, that, itself, was a stretch.

“Like I said, you never know. Leaving [Cumberland] had a lot to do with the direction of my main job. I felt my career was going in one direction, and their options weren't the same, so I had to look at other career options.

“I was interested in returning for my second year, but this opportunity opened up, and it was something I couldn't pass up.”

Gregory was not reappointed as a teacher for the 2011-12 school year, but he was as boys basketball coach at CHS. A coaching stipend doesn't put food on the table or pay the light bill.

“I'm grateful for the time and effort he put into the basketball programs at Cumberland over the last three years,” said CHS director of Athletics Matthew Pearman. “We're much better off for him having been here, and we wish him the best.”

Pearman said that Cumberland is conducting a search for its next boys basketball coach.

Gregory is conducting searches of his own. For players. After a stretch of solid basketball that has resulted in five-consecutive VISBS Division III Tournament appearances, the Falcons are expected to be hit hard by the graduation of 6-8 All-State center LeVon Harper. Replacing him will be difficult.

“There have been some past successes here, and we have something to build off of,” said Gregory. “Fuqua can become a recognized competitor for titles in the private school ranks. There are a lot of talented kids, good kids, around here that get overlooked. Maybe it's because of where we are, or for whatever reason – but this can be a place where they can get noticed.”

He does have some connections at the top level of college basketball.


Gregory credits Shaver and James Scott, his coach at Prince Edward, as playing key roles in not only his basketball life, but in other areas as well.

“I haven't talked to Coach Scott at this point, but he's always been there. I have confided a lot in Mr. [Gerald] Roach [at Prince Edward]. He's been a heavy resource for advice in my life. He gives me both sides of the fence, and sometimes tells me things that I don't want to hear, but need to hear anyway.”

One thing Gregory has learned is to have a plan, and to have it ready to go at a moment's notice. He has already started to work on recruiting players.

“There is returning talent for a good Fuqua team. We have to first recognize what we have to work with, and go from there,” said Gregory, who added that in addition to talking to potential students about the boys basketball team, he's also talking to kids who may be able to help the school in other areas – not only in sports – as well. “Long term, we have to start building a base from young players in the lower school, up through the middle school and to here. We've got to have a balance.”

Gregory said that he's talked to a number of possible recruits.

“Two of them are girls. I'm wanting to improve all aspects of the programs here. Not just the boys basketball team. And not just the athletics programs.”

“We are just thrilled to have Marcus Gregory join the Fuqua School community,” said Fuqua School president Ruth Murphy. “Clearly he is a man of character, dedication, and talent. I am confident that his knowledge of basketball, his experience as an athlete at Hampden-Sydney College, and his natural ability to relate to young people will enhance our athletics program as we continually work to provide the best possible sports options for our students.”

It's one thing to get a van of good basketball players together to take them to Richmond for a weekend of basketball games. It's another to convince someone to come to a school, and then to find a way to fund his or her tuition.

“That's going to be an issue,” said Gregory. “We're going to have to do some fundraising for all the programs here, and that's one of the visions we've talked about. It's not unlike what they do at Hampden-Sydney. You don't want cost to get in the way of a student that is willing to do the work academically.”

Gregory did say that it would take the right kind of student to succeed in his system and at Fuqua. For him, the two are one in the same.

“I'm pleased to have him here,” said Fore. “I remember seeing him play and lead the basketball team at Hampden-Sydney. If he approaches this job the same way he did with those teams, the basketball programs will have no trouble getting to that next level.”

“I'm going to learn all the ins and outs of this job. Everything from fundraising to lining fields,” said Gregory. “I'm just grateful to have this opportunity.”