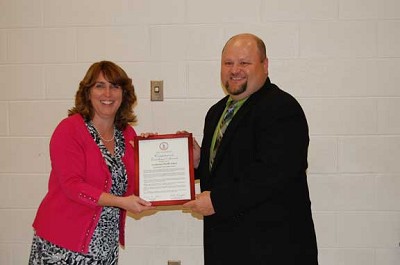 The Governor and the Virginia Department of Education announced the award earlier and the Middle School was the only Cumberland school to receive the honor.

The school was one out of 289 earning the Board of Education Competence to Excellence Award for having met all state and federal benchmarks for at least two consecutive years.

And, according to the announcement, the criteria included in the award is that the school must continue working towards meeting goals such as increasing student achievement and expanding educational opportunities that have been set by Governor Bob McDonnell and the Board of Education.

In keeping with the recognition flow of the meeting, the Board also recognized the school system's Students of the Month, Meet the Community members, and Meet the Staff honorees.

From the Elementary School, pre-kindergartener Chase Myers was awarded a plaque and certificate for his accomplishment as being named student of the month.

Next, Middle School eighth grader Shelby Atkins received the same recognition and eleventh grader Christopher Deane also was recognized for his hard work and dedication to his academics at the High School.

The 'Meet the Community' recognition went to the three brothers of Napa Auto Parts in Cumberland.

Paul, Kevin, and Mark Ingle each received a token of appreciation for being active community members since graduating from Cumberland High School.

“The Ingle brothers are family men who are dedicated to their business and community,” said Elizabeth Jamerson when making the presentation to the School Board.

Wendy Tillet, Middle School teacher; Calvin Porter, custodian; and Ronnie Crews, a mechanic for the school system, were all recognized during the meeting as the School Board's 'Meet the Staff' honorees.

Wyatt Salinas was the school division's spelling bee winner and later he went on to compete at the regional level.

He was also recognized at the meeting and is the son of Joe and Vivian Giles of Farmville.

According to Ms. Jamerson, he competed with 32 other students from school districts around the region at the Library of Virginia last month.

Ms. Jamerson later announced that the Southside Virginia Regional Technology Consortium annually presents technology awards to individuals and school divisions in the SVRTC area at the Awards banquet and this year Cumberland, again, was well recognized.

Finally, the Virginia School Board Association's art show winners from Cumberland were showcased.

Cumberland's three pieces of art that were entered by the school division in the Virginia School Board Association's art show were Markel Blakey's piece from the Elementary School; Kayla Lawson's work from the Middle School; and Ayla Coffey's creation from the High School.

The VSBA Southside Regional Forum was held this year in Cumberland on March 17.

To outline all of the new and exciting green initiatives taking place throughout the Cumberland school division, a Green Team presentation was given in preparation of Earth Day during the April meeting to the School Board members.

Middle School teacher Carrington Light and High School teacher Angela Whittaker gave an overview presentation on the forward movement that has been taking place within the three schools related to “Going Green” projects.

The Green Team, according to Ms. Light was originally created to coordinate on sustainability projects and efforts and is comprised of teachers and administrators from the three schools and a few community members.

So far, a compost bin for the community garden has been created, a bus loop beautification project has been enacted (with assistance from the Cartersville Garden Club and Master Naturalists), recycling is taking place all around campus, and a student energy and water review was conducted within the school complex.

Ms. Light also noted that teachers are also conducting paper reuse and sustainability courses are being offered as a career and technical opportunity at the High School.

This spring has brought forth the planting of an herb garden, a traditional garden, a raised bed garden, and a memorial garden is beginning to take shape in the courtyard, Ms. Whittaker announced.

“Our mission is to provide meaningful student service learning experiences in sustainability and renewable technology,” said Ms. Whittaker. “To help our students ensure their future.”

April was the month for a lot of first read items pertaining to policies and plans. The School Board was presented with many policies for review and will take a closer look at them in May when they will be addressed for approval at that time.

Those plans included: the Career and Technical Education Local Plan for 2011-2012, the Technology Plan, the Special Education Annual Plan and Title VI-B and VI-B Incventive Plan, and the Talent and Gifted Plan.

The policies included those associated with: advisory committees to the School Board; reporting acts of violence and substance abuse; purchasing procedures; unlawful manufacture; distribution; dispensing; possession or use of a controlled substance; evaluation of professional staff; programs for gifted students; acceleration; suicide prevention; and service animals in public schools.

According to Dr. Griffin, the majority of these policies changes being addressed are due to legislative action in the General Assembly resulting in the Code of Virginia being amended or policy revisions due to updating legal references and cross-references.

In other first review news, the Cumberland Elementary, Middle, and High School Student Handbooks for the 2011-2012 school year were also presented.

They were sent to the School Board members electronically and will be addressed in further detail in May, according to Dr. Griffin.

To begin the Board comments, School Board members George Reid Jr. announced that he had attended the Call Me Mister banquet held at Longwood University recently where a Cumberland teacher, Justin Wilkes, was part of that program that included funds being raised to assist students with scholarships.

Chair Dr. Christine Ross took time during this portion of the meeting to acknowledge the fact that Governor McDonnell had announced his veto of the legislative action that had passed earlier in the state's budget process that would have mandated additional physical education time in public schools.