Abbitt Retires: All Downstream From Here 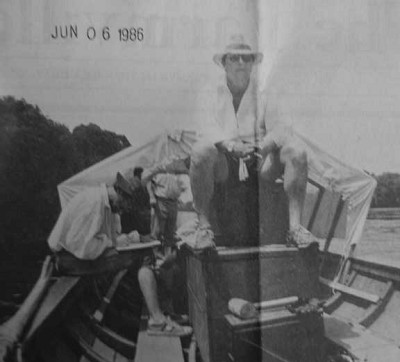 FARMVILLE – On the final day of any General Assembly session, time stands still.

Legislators simply stop the clocks and put off the deadline until the last work-usually adopting a state budget-is done.

Time won't ever stand still like that again for Del. Watkins M. Abbitt, Jr. On Tuesday afternoon he announced his retirement from the House of Delegates after 26 years in the legislature.

The hands of his clock now point toward destinations other than the State Capitol, downstream toward new bends in the river for the noted outdoors enthusiast.

“I have a lot of things I want to do,” Abbitt said during an interview with The Herald.

“I was ready to move on. (Being a legislator) had become almost full-time.”

The 66-year old Abbitt, who went into the General Assembly as a Democrat and leaves as an Independent, won't seek elected office again, turning down many overtures to run for the newly-created 22nd State Senate District.

But he does see himself remaining politically active, especially during the upcoming fall election to fill the vacancy created by his departure.

“I think I'll certainly be involved with my replacement,” he said, naming someone he hopes will run. “And probably in the senate race, too. I want to make sure we keep good people representing us.”

Abbitt isn't surprised by his decision, though he has startled others with his leaving. He'd already promised himself to retire no later than age 70, though when first elected in 1986 he expected to serve no more than 12 years.

But the recent redistricting that altered his 59th District helped confirm his restless feelings, just as the retirement two years ago of his trusted House of Delegates sidekick, Clarke Hogan, may have nodded those sentiments into wakefulness.

Retiring now feels right to him.

Asked what he's going to miss least about politics and he quickly answers, “The job of staying elected.”

There are two jobs, Abbitt will tell you. Getting into office and doing the legislative and constituent work is one job. Staying elected is the second.

“And I guess that really is the deciding factor,” he said of his decision to retire.

What role did the recent redistricting play?

Abbitt calls the new 59th district a “very good district” but it's apparently not good enough to make him want to call it his own.

“I still have 9,000 (constituents) in Albemarle. I only have half of Nelson County. I don't have Cumberland,” he said. “If I had Cumberland, Buckingham and Appomattox, I didn't care what else they put in my district.

“And I had a piece of Prince Edward. I lost that. I lost Cumberland. Now I pick up 35,000 in Campbell County. That's 35,000 new constituents. A half a district, almost, that you have to get to know and that probably played into (the retirement decision) a little bit in that that's the staying elected job. I didn't think I had it in me,” Abbitt declares with self-awareness. “If I was going to stay I would have had to work that much harder. I would have made myself (work harder).”

But other feelings were stronger. “I just think now's the time, instead of waiting. I said I wouldn't stay longer than 70. Instead of waiting four years,” he said, “I'm going now.”

“I thought I'd probably stay 12 years when I first ran,” he said, but “once you get there you realize that every year you get a little more influence and get a little more things done and you get on different commissions.

“You know, really, my pet project was High Bridge Trail. I told somebody I would not have gotten out if that had not gotten into Pamplin. I think that's really going to help Pamplin,” he said, then mentioning state funding to help relocate the Museum of the Confederacy to his home county of Appomattox, just down the road from Appomattox Court House National Historical Park.

“So I've accomplished a lot of things I wanted to,” he said.

Farmville Town Manager Gerald Spates had nothing but accolades for Abbitt. “Watkins always went to bat for us,” Spates said Wednesday. “He really took an interest in what we needed, in all of Southside Virginia. He's done remarkable things and we're really going to miss him.”

The graduate of Ferrum Junior College and Virginia Commonwealth University believes his biggest accomplishment is being “a voice for rural Virginia, the whole time I've been there, and that's the biggest thing I can say. When you talk to people, where the majority (of legislators) are from the city, they don't understand rural life…I tried to be a voice for them and I hope whoever succeeds me will be.”

Succeeds him in Richmond, not Washington.

The biggest misconception people have about members of the General Assembly, he said, is “that we get paid a lot-$17,640 is what I get paid. I don't get paid what Washington does. And you would be surprised, even today, how many people think I'm in Washington,” said Abbitt, whose father did serve for 25 years in Congress. “I had somebody ask me yesterday, maybe it was Sunday-how are things in Washington? And I just said 'Crazy as ever' and kept going.”

Kept going, unbeknownst to the person who asked him the question, toward his retirement announcement.

An announcement made personally to two newspapers, no fanfare press releases to media outlets. While he was telling The Herald, Abbitt's wife, Madeline calls to make certain he informs his two desk mates in the House chamber of his retirement. He's already done so.

The interaction with people is one of the things he will miss most. His fellow legislators. Constituents.

“All the interaction with people. I enjoyed that,” he reflected. “And I enjoyed constituent services. You can make a difference in somebody's life the first day you're there (in the General Assembly). You cut through some red tape. You're really an ombudsman for the constituents (regarding) state government. A little old lady can't get a drivers license and you call DMV and work it out for them. That just makes their day. You get a lot of 'Thank You' letters from people that you help like that.”

For the person who takes his place in the 59th District, and for the winner in the 22nd District Senate race, Abbitt has some advice.

The first big committee assignment was the House Finance Committee, “a stepping stone” to the most powerful Appropriations Committee, Abbitt said.

“At that time they wouldn't give you appropriations unless you'd been on finance. They wanted to see you raise the money before you got to spend it. So that was my purpose for going there,” he explains.

Abbitt had learned the ropes and he was climbing them on behalf of his constituents.

The retiring delegate said he told House Speaker Del. William Howell that he would give up his place on the Labor and Commerce Committee “if you all will give me a subcommittee chairmanship.”

There was a good reason.

“At the same time, I had Clarke (Hogan) there and he went to a subcommittee chairmanship, so between the two of us we could be pretty influential,” Abbitt said, explaining that Hogan's retirement two years ago “probably had a lot to (do) with” his own retirement decision.

“It was good having him there. I never had anybody there I could work with like that,” Abbitt candidly states. “Losing him was a big blow for me.

“His office was beside me,” Abbitt said of Hogan, with whom he shared representation of Prince Edward. “We sat on three subcommittees together-six-member subcommittees, so if two of us argued the same way we could virtually control those subcommittees. And working legislation, we did very well at it.”

House Speaker Howell paid tribute to Abbitt on Wednesday and his learned expertise of the process.

“His knowledge, experience and strategic understanding of the legislative process are underscored by so many accomplishments that have strengthened Virginia's economy, enhanced agricultural production, improved educational achievement and benefited law enforcement and constitutional officers,” Howell said in a statement released to the press. The House Speaker added that, Abbitt “always recognized the first and fundamental role of any elected lawmaker-represent and serve those who elected him. That he did without fail and without seeking attention or accolades for himself. Because of his hard work, he improved the quality of life for his constituents and all Virginians through such achievements as the development of High Bridge Trail State Park in Farmville. As Chairman of the Appropriations Subcommittee on General Government, Watkins has been a stalwart advocate for the law enforcement community. Indeed, his leadership and many talents are widely recognized with him having received a number of awards and distinctions, including being chosen as “Legislator of the Year” by the Fraternal Order of Police.”

Governor Bob McDonnell described Abbitt on Wednesday as “a public servant with keen political instincts” and noted his bipartisan ability to work “with both parties to get things accomplished for his district and the Commonwealth.”

Looking back on his 26 years in the House of Delegates, Abbitt reflected, “It's been a real honor and privilege. And I loved almost every minute of it.”

Minutes that will no longer stand still for him on clocks stopped at the state Capitol.

But the current will continue flowing downstream.