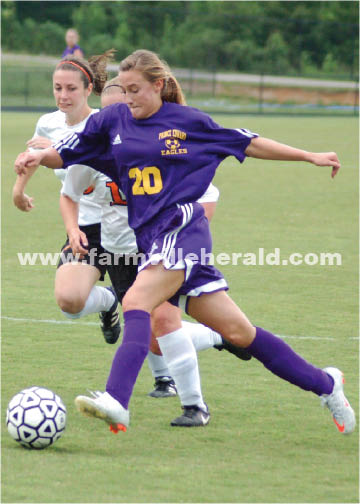 POWHATAN – For the Prince Edward County High School girls soccer team, a tie was as good as a win in a 3-3 decision against Powhatan Monday evening.

The Lady Eagles, who defeated Powhatan last month in Farmville, needed only to not lose in order to wrap up the Southside District's regular-season championship.

“We're a little disappointed with the tie, because we knew we could win,” said PE head coach Jason Crabtree. “But we'll take it.”

Early on, it looked like PE was going to win going away, but Powhatan rallied from a 3-1 halftime deficit to tie the contest about 20 seconds into injury time, and force two five-minute overtime periods.

The Lady Eagles wasted little time in scoring. Senior center/midfielder Kylie Dyer scored in the third minute on a pass from Katrina Lowe from eight yards out. Four minutes later, a second shot by Dyer hit the goalpost flush and bounced back into play.

Powhatan tied the match at 1-1 in the 18th minute on a deflection, but Prince Edward's speed advantage on offense began to show.

Just a minute later, Lauren Keup picked a pass out of the air, settled it and found a Lowe on a cross pass. The shot went wide, but in the 26th minute the two hooked up again on a similar play that ended in a goal with Lowe scoring from the top of the penalty box.

Dyer put the Lady Eagles ahead 3-1 on a goal in the 28th minute. The Lady Eagles had four more good shots on goal over the remainder of the half, but were turned away each time by either errant shots or saves by the PHS goalie.

Almost as if the field was tilted toward the field house end of Powhatan's stadium, Prince Edward seemed to be playing uphill in the second half. Powhatan peppered the Prince Edward goal with numerous shots that just missed or were turned away by PE keeper Taylor Reinson.

The Lady Indians got a shot to go through in the 57th minute when a shot banked off the left goalpost and into the net.

“We had Kylie playing more of a defensive approach, and I think that helped to pull them closer into the goal,” said Crabtree. “We were also not passing as well. It became a kickball match.”

The last 15 minutes went much like a heavyweight fight in the late rounds. Both teams had dropped their blocking hands and exchanged haymakers. Powhatan finally got one to land, just 20 seconds into stoppage time to tie the match.

“It really wasn't a pretty game by either team in the second half,” said Crabtree. “It was like both teams just decided to go for it. It was intense, physical and entertaining to watch, but for us, it wasn't how we got the lead.”

The back-and-forth action continued in the two five-minute overtime periods, with both goalies turning away shots that were on goal.

Dyer had one last shot just before the final whistle on a penalty kick from about 25 yards out, but the shot at the upper-right corner of the net sailed just wide.

“One thing I was really happy to see was that our conditioning work has really paid off,” said Crabtree, who saw that as a reason the Lady Eagles lost to Powhatan early in the season in a game that was not counted as a district contest. “We looked to be as fresh as they were down the stretch, even as they turned up their intensity on offense.”

With a Thursday night home match against Nottoway (6 p.m.) still to play before the Southside District Tournament, the Lady Eagles can breathe a little easier with the district title, and the automatic bid into the Region I Tournament in hand. Still, Crabtree sees room for improvement.