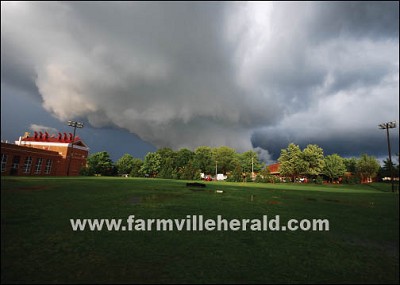 FARMVILLE – Kim Woods' daughter telephoned Wednesday evening, warning her mother to go look at the black clouds slithering in the sky above her home.

That's bound to be a tornado forming, Ms. Woods recalls her daughter, Brittany, cautioning her.

Ms. Woods' son, Jordan, was on another phone, also protectively alerting his mother to the sky's evil machinations as he was driving home from work.

The dark clouds slithered, coiled and then they struck.

“I opened the door and the tornado was right there in my backyard,” Ms. Woods told The Herald Thursday morning.

Ms. Woods describes the backyard of her Roberts Street home as “as big as a football field” and the tornado's funnel, she said, “filled the whole backyard.”

The tornado was filling her yard as her heart seemed to be leaving her body.

“I felt like my heart was going to jump out of my chest,” she said.

No injuries and no serious damage has been reported from the tornado which struck Farmville shortly after 7 p.m., according to Town officials. Wednesday's twister is apparently the first confirmed tornado in Farmville since the 1930s.

Damage was greater outside of town in Cumberland down River Road, but no injuries have been reported as The Herald was going to press. The tornado was spawned by deadly weather that saw more than 100 tornados from the Alabama to Washington, D.C. that left more than 200 dead.

Farmville's tornado was fierce but not fatal.

The tornado in Ms. Woods' backyard was “whirling” everything around.

A heavy wooden swing-set was lifted up and then the tornado “threw it down like it just spit it back out,” she said.

Warning the three others in the house with her to go downstairs, Ms. Woods said she couldn't resist another quick look outside, even though she knew she shouldn't.

Another surprise met her eyes.

“The sun was shining,” she said of the quickly moving tornado.

Neighbors were, like her, coming out of their homes. There was vinyl siding from other homes in Ms. Woods' yard and in the trees.

But everyone was safe.

Ms. Woods will never forget what she saw. The experience is an indelible part of her life.

She described herself as “almost in shock” after seeing the funnel.

There was a certain rush of excitement caught up in the moment, but Ms. Woods declared, “I hope I never see that again.

“It hit us in seconds.

“We had no time for nothing,” he said Thursday morning.

The window was blown out of Womack's bedroom and the pictures were whooshed off the walls.

He looked outside and saw “just a swirl of trash and limbs.”

His mother, Estelle, was in the bathtub when the tornado hit.

“She came out and asked me 'What were you hollering about? Did anything happen?'” Womack said.

Womack said his dog, who had been laying down in the bedroom, was most frightened by the brief but fierce storming.

“I didn't see him for ten minutes” after the tornado left, Womack said.

A tornado that tore up Womack's shed and the back part of the roof of the house.

As The Herald went to press Thursday, most of the region remained under a tornado watch.

Farmville was under a tornado seen Wednesday night.