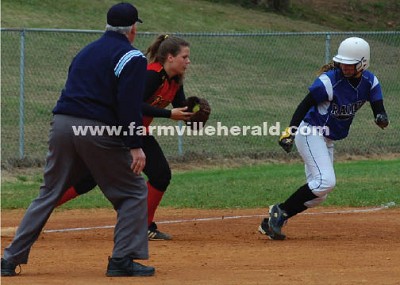 FARMVILLE – After a solid start to the 2011 season, the Fuqua School softball team has fallen on hard times of late.

An opportunity to right the ship at home on Friday against Southampton Academy (which was winless in VCC play prior to Friday's contest) went by the boards, as the visitors built a big lead in the fifth inning.

“We couldn't get anything going, and it got away from us quickly,” said FS head coach Robert Schmidt. “This one hurts, given [Southampton's] record coming into the game, but they were hungry for a win, and when a few things went right for them, they took full advantage of it.”

Fuqua gave up two runs in the top of the first and three in the second to trail 5-2 after two innings.

The Lady Falcons scored one run in the bottom of the first when Whitney Southall singled in Tatum Davis, and another in the bottom of the second when Kari Davis drew a one-out walk and worked her way around the bases to score when Caroline Bryant grounded into a fielder's choice.

Fuqua held off the ten-run rule with a pair of runs in the bottom of the fifth. Marcie Ware doubled with two outs and was joined on the basepads by Taylor Schmidt. The two came around to score when Southall reached base on an error by the SA center fielder.

Fuqua held Southampton scoreless in the sixth, but gave up six more runs in the top of the seventh to end any hopes of a late comeback.

Injuries and a stretch of play against some of the heavy-hitters in the VCC have helped to send the Lady Falcons into a downturn. Schmidt didn't really like using injuries as an excuse, but he acknowledged that it has caused some shuffling of things in the field.

“When you get an injury, you usually wind up having to take one person out of one position and put them into a less familiar one, and then you have to put someone in that position. It does make a difference.

“Early in the season, we weren't making many errors, now we are.”

Much like the baseball team, the Lady Falcons are sophomore heavy. The lineup has just two seniors, with five sophomores and three freshmen.

“You could say that a good portion of our line-up would be playing JV in a different situation, but a lot of those sophomores played varsity last year.”

Fuqua was scheduled to complete its opening-day contest with Tidewater Academy on Wednesday afternoon at home. The contest was tied at 5-5 in extra innings before being suspended by darkness.

“A tie would've done neither of us any good, so we're going to play it on Wednesday. Hopefully, we can get that one and start to get things back on track.”

After the tie is settled, the two teams will play their regularly-scheduled game. Next Tuesday, the Lady Falcons will host Richmond Christian. Fuqua defeated RCS 7-2 on March 31.