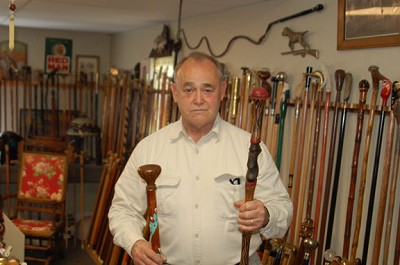 Billy Sutton frequently walks with a cane…or two…or three. He hopes his collection of canes will help him walk into the Guinness Book of World Records in the near future.

The Cumberland native, whose family dates back many generations, collects canes and now has 750 or more in his collection. He is retired from Sutton Brothers Painting Contractors in Richmond and now spends his time searching auctions and making more canes. Glentivar, the family's ancestral home, sits across Ampthill Road from his home. Sutton is quick to point out the walled-in family cemetery with its farmers and Civil war soldiers. He is quite a historian and has a keen memory not only of Cumberland history but of American history.

Sutton was a member of the 82nd Airborne division and served in Germany during the early 1960's. It was there that he met his wife Ilona. She is not a cane fanatic but her family helped him accumulate the souvenir canes from Germany. These canes are adorned with colorful metal tags identifying the cities in Germany collected by mountain climbers and tourists on walking tours. He always had an interest in canes but really got “the fever” as an adult. While stationed in Germany the Berlin Wall was constructed and these memories are vivid in Sutton's mind. “I was in Germany when the wall was built – most Americans never knew just how hot things were during that time. American tanks faced off daily with Russian tanks. Nose to nose. East Germany was Communist controlled and we were really lucky there was never a serious armed confrontation. The communists did kill civilians on a daily basis who were trying to cross from east to west. Uncle Sam kept us mad, mean and lean – we were ready to fight if necessary.”

“Most people who carry or carried canes don't do so because they need help walking, Sutton continued. They carry them for self-defense or for the look. I have many examples which conceal a dagger or knife. I even have a cane made with a derringer in the handle. Most people don't know that if you carry a cane with a dagger you really need a concealed weapons permit.” According to internet sources “canes were, for a period of at least three centuries, as crucial a part of the male wardrobe as a pair of trousers is now.” It is often said that the cane replaced the sword in the 1700's. Sutton's collection contains canes of dozens of different varieties of wood, bamboo, metal, bone, ivory and even glass. “For a cane to be good – it has to feel good in your hand.” These are not walking sticks which are longer. Canes are always about waist high-depending on how tall you are.

Every farmer had a stock cane for controlling livestock and places like Southern States used to give them away as advertising or gifts. Canes were used in the circus to corral people around the neck to drag them into shows. Canes were used on the stage to drag people off when the audience booed them. Canes may have evolved from the shepherds crook and they certainly have been around since ancient times.

For Sutton the head of the cane is art. “My love of canes was heavily influenced by the late Perry Turpin” he added. “He taught me a great deal about carving, in fact he taught me everything I know. He could do anything. We carved the tops out of wood and deer antlers and added things like coins, or doorknobs or even a piece of African art shaved down to fit the shaft of the cane.” Sutton has canes which feature snakes, horses, animals, are adorned with carving including names and dates. As well as religious figures, a compass, ducks, dogs, brass knobs, glass knobs, birds, human heads, and even Santa Claus. Some of his canes are factory made but the majority are hand-made pieces of folk art.

Billy Sutton hopes to get in the record book this summer. “My next closest competitor has 600 canes but I'm way ahead of him and my collection is constantly growing. This newspaper article will facilitate my acceptance into the book.” It proves the collection really exists. It has been a long walk but Sutton is closing in on the finish line.