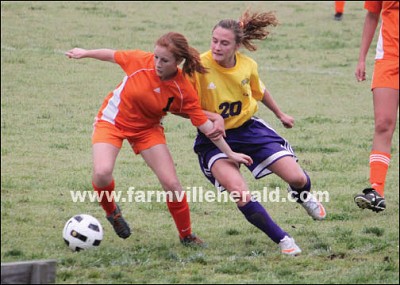 Since rejoining the Southside District six years ago, the Prince Edward County High School girls soccer team has chased perennial district front-runner Powhatan. Last Wednesday, the Lady Eagles finally caught the Lady Indians, as PE held on for a 4-3 victory over Powhatan at home. Above, Prince Edward junior forward Katrina Lowe (right) battles to gain possession from her Powhatan counterpart. Lowe scored two goals in the match, while senior midfielder Kyle Dyer scored the other two for the Lady Eagles, who led 2-1 at halftime, and 4-2 midway through the second half, before holding off a late Powhatan rally. The victory, gives Prince Edward the upper-hand in the race for the Southside District regular-season title, but the two teams will meet again to wrap up the regular-season on May 16. (Photo courtesy of Melanie Holman)