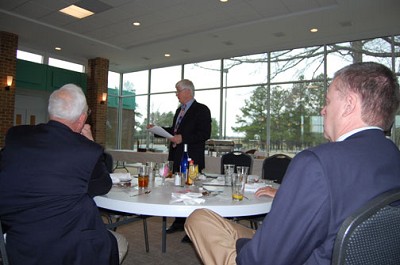 FARMVILLE – Prince Edward County and the Town of Farmville are flowing toward a discussion about getting water from the Sandy River Reservoir.

The subject was raised during Monday's quarterly, and agenda-less, joint meeting between the Board of Supervisors and Town Council, with mutual assurances of a formal conversation to come.

Several years have passed since Supervisors and Council members met specifically to discuss possible cooperation to pipe water from the reservoir to benefit the Town and County's long-term water needs.

Prince Edward is in the final stages of information gathering about a possible County-operated water system using the Sandy River Reservoir. Board of Supervisors Chairman William G. “Buckie” Fore believes it would be premature for the Town and County to have a formal water conversation on possible alternatives, or variations, until the County is in receipt of all the facts and figures regarding that proposed system.

But he welcomed dialogue with the Town once that information has been received and digested by the Board of Supervisors.

Supervisors and Town Council members nearly left Monday's meeting at the Farmville Municipal Golf Course with the only mention of water being the waitress's query about water or tea with lunch.

The formal presentations by County Administrator Wade Bartlett and Town Manager Gerald Spates were over, and Monday's joint meeting about to adjourn without a single reference to the Sandy River Reservoir or a pipeline, when Town Council member Sally Thompson asked a question.

“Can I speak to the elephant in room? And there certainly is an elephant in this room,” she said. “I would like to suggest that we together build the pipeline from Sandy River to the town and we operate together using the Town's existing water plant, which we would upgrade…

“We would have doubled our water capacity with minimal cost to the taxpayers,” Ms. Thompson said. “If we can build a library together, and operate it, we can operate a water plant together. It's a win-win situation.

“Come on, guys. Let's form a committee and let's work,” she said, “together.”

“Buckie,” Ms. Thompson interjected, “when the time comes” the Town and County need to get together and talk.

Bartlett told Town officials “once we get our financial analysis, then start the public informational process” then the County and Town could talk about how a water project might proceed.

Ms. Thompson was not alone in her willingness or enthusiasm to re-engage water talks with Prince Edward County.

“I think there's more to talk about than just that option…I think the underlying consensus is,” Dr. Gordon said, “could the Town be of value to you in helping with a pipeline, whether it be the way it was presented four years ago or a different way. It's not written in stone what was said four years ago…

“I think it would not be a bad idea, once you get where you want to be (information-wise), to sit down and see if there is a way for us to help,” Dr. Gordon said.

“…To sit down and talk about maybe how we could help four years later. Not what we said four years ago but maybe there's a different way for us to help. Maybe there's a broader way or some other way that would be more advantageous to save money for all the citizens of Prince Edward,” Dr. Gordon said.

Town Council member Donald L. Hunter told County officials Monday, “what we wanted to do is let you know the (olive) branch is still there.”

Fore told his Farmville counterparts that the County never doubted the Town's willingness to sit down and talk.

He stressed the need to wait for all final information before the County speaks formally with the Town by noting he doesn't even speak to his fellow Board of Supervisors members about the proposed project.

“Let me say again, it's never been an issue of whether or not we thought the Town wouldn't sit down at the table with us,” Fore said. “Never.”

Hunter spoke at that moment of the olive branch still being there, and then the meeting adjourned.

After the meeting Fore told The Herald the County would meet with the Town to talk about the Sandy River Reservoir and a pipeline.

“We've got all kind of options, but we need to know what's it cost,” he said, “what's the impact. There are some other options out there too. Sally's was one of them.”

When asked if he was pleased to hear Town officials speak of looking for ways to cooperate on such a project with the County, Fore answered, “absolutely. Absolutely.

And the county's Board of Supervisors chairman added this final thought:

“I think some of us have lost sight of what the mission really is. The mission's not to build a water plant,” Fore said. “The mission is to ensure that the Town of Farmville never, ever runs out of water. It doesn't make any difference how you get there.”

(As the Town and County were pursuing the possibility of working together on a pipeline project in 2007, a technical memorandum/preliminary engineering report in February of that year contained four possible alternatives. One of those would have seen Prince Edward provide raw water from the Sandy River Reservoir to the Town of Farmville, with a raw water intake and pump station at the reservoir and a pipeline to the Town's water treatment plant.

The estimated shared cost of that alternative was $20.95 million, which included a $4.18 raw water intake and pump station, $800,000 treatment facilities at the reservoir, an $11.63 million 24-inch pipeline from the reservoir to the Town's water treatment plant, and $4.34 worth of upgrades at the Town's water treatment plant, for a total estimated cost of $20.95 million.

Four years later, the Prince Edward County Board of Supervisors members have until May to move forward with the $24,879,000 price tag for a County water system, which doesn't include additional indirect costs of $841,900.

The County, per the existing reported deadline timeframe, will receive a final lump-sum construction proposal at the end of March, allowing the Board of Supervisors to make a decision at its April board meeting. If the answer is Yes, to build a new Prince Edward County water system, there would be a 30-day waiting period for a contract to be drawn up and executed in the middle of May.)