Season Ends For PE Girls In Region I Semifinals 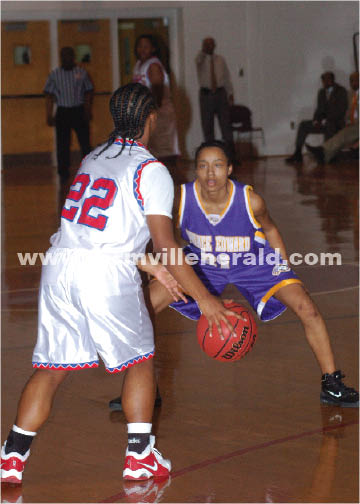 COURTLAND – The Prince Edward County High School girls' basketball team's season came to an end on Thursday night in a 44-36 loss to Southampton in the semifinal round of the Region I, Division 3 Tournament.

The Lady Eagles (16-10) couldn't find the same shooting touch that allowed them to advance past Greensville last Tuesday night, but despite their struggles from the floor, PE managed to hold a lead with a little over five minutes left in the fourth quarter, before Southampton closed with a 15-5 run to end the game.

“We had shots all night, but couldn't put them through the net,” said PECHS head coach Chris McCormick. “Rebounding was key again. We fought that all year. Even when we boxed out, we couldn't seem to get to the lose ball.”

Prince Edward trailed 16-15 at the half, and trailed 27-21 with 52.9 seconds remaining in the third quarter, before the Lady Eagles mounted a 10-2 run between the third and fourth quarters to take a 31-29 lead.

Prince Edward guard Regisha Elliott's runner started the scoring streak, which was bolstered by a Shadae Childress lay-up at the third quarter buzzer.

The Lady Eagles trailed 28-25 at the break, but the combination of Elliott and Childress put PE up 31-29 on a lay-up by Childress at the 5:38 mark.

Then, things came to a screeching halt. Southampton's Tenicia Joyner was fouled while shooting a lay-up. She missed the ensuing foul shot, but Southampton forward Regina Artis corralled the rebound, and scored to cap what was, in effect, a four-point-play to give the Lady Indians a 33-31 lead with five minutes remaining.

Elliott hit two free throws with 3:58 left to play to tie the contest at 33-33, but Southampton closed the game with an 11-3 run, which included a technical that was whistled on McCormick with 2:15 left.

A made free throw by Childress with 1:01 remaining cut Southampton's lead to 39-34, but Artis hit three of four free throw attempts in the final minute to ice the game.

“We knew that we would be out-rebounded coming into the game,” said McCormick. “Our plan was to counter that with our defense in the full court. We wanted to break even on rebounding versus turnover margin. We caused some turnovers, but in the end it wasn't quite enough.”

Childress and Elliott scored 15 points apiece to lead Prince Edward, while Artis and Joyner scored 19 and 10 points respectively for Southampton.

For the second straight year, Prince Edward's season ends one game shy of an invitation to the Group AA, Division 3 State Tournament. McCormick said after the game that he was going to retire from coaching the girls basketball team.

“It's time,” said McCormick. “My wife and I want to enjoy more time together. I thought about it for a while, but I wanted to stay to see this senior class through. I'd like to see the next class, and the next, but somewhere you've got to stop. It's been a good run. We've gotten to two regional semifinals, and a few years ago we won the Southside District Tournament. We've had a lot of good times, and I've enjoyed coaching the girls.”