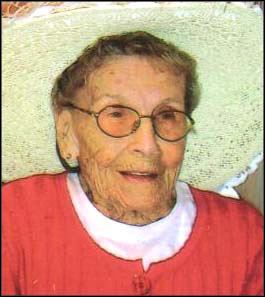 Mrs. Turner spent most of her life in Arvonia in Buckingham County. She was a retired postmaster with 40 years of postal service. She was a member of the Order of the Eastern Star, Fork Union Chapter #111 for the past 65 years. She also belonged to the Association of Retired Postmasters. She was a member of Grace Episcopal Church in Bremo Bluff.

Mrs. Turner was a loving wife, wonderful mother and grandmother, who had a great capacity to love and always took care of her family. She was known for her warmth and her wit. She eagerly looked forward to her 100-year-old birthday. She lived six months of her 100th year.

She is survived by a daughter, Patricia Gibbons and husband, Wayne of Spotsylvania; daughter, Brenda Brinkley of Sevierville, TN; three grandchildren, Stephanie Oldham and husband, Ken, who are currently stationed in Germany, Bradley Gibbons and wife, Lauren of Midlothian, and Kasey Watkins of Pigeon Forge, TN; five great-grandchildren, Connor Oldham, Ryan Oldham, Shannon Oldham, Destiny Watkins and Chelsey Watkins. Her sixth great-grandchild is due in May. Mrs. Turner is also survived by one sister, Lucille Phelps of Richmond; two sisters-in-law, Frances Roberts and Lillian Roberts both of Newport News; 13 nieces and nephews; 22 great-nieces and nephews; 10 great-great nieces and nephews, several cousins and many, many friends.

The family will receive friends on Tuesday, March 22, (tonight) from 6 p.m. to 8 p.m. at the Dunkum Funeral Home.

The funeral service will be held Wednesday, March 23, at 11 a.m. at Grace Episcopal Church in Bremo Bluff with interment in the church cemetery. A reception will follow in the parish house.