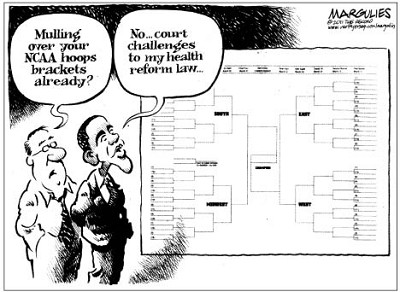 In a stern test of our national, and personal, commitment to the First Amendment protection of free speech, the Supreme ruled on March 2 that protests staged at the funerals of those who gave their lives in military service to this country are constitutionally protected.

Those soldiers died protecting our way of life, our constitutional rights, and that includes the protests at their own funerals.

How any human being, however, could stage such protests at funerals is something I cannot comprehend. I find the malignant language and character of the protests at funerals to be beyond the furthest pale. Protest our national policies all you want, I say, just not at someone's funeral.

But we either believe in the First Amendment or not.

The protesters believe God is killing American soldiers for this nation's tolerance of homosexuality. At one funeral, the Associated Press reports, they held signs with messages that included “Thank God for dead soldiers” and “You're Going to Hell” and “God Hates the USA/Thank God for 9/11.” There was also a sign, according to the AP, that “combined the U.S. Marine Corps motto, Semper Fi, with a slur against gay men.”

In his opinion on behalf of the eight-justice majority, Chief Justice John Roberts said the First Amendment protects “even hurtful speech on public issues to ensure that we do not stifle public debate.”

I accept his thinking but my heart is also in tune with the words of the Supreme Court's lone dissenting voice. Justice Samuel Alito said the father who brought the lawsuit sought only to “bury his son in peace.' Instead, Justice Alito said, the protesters “brutally attacked' the deceased soldier-who was not gay-to attract public attention.

“Our profound national commitment to free and open debate is not a license for the vicious verbal assault that occurred in this case,' Justice Alito said.

Sometimes we have to hold our nose with all the vigor we can muster while others exercise their right to free speech.

But Americans can also do something else, thanks to Operation Honor Guard. Those so disposed can make their own supportive presence felt at military funerals on behalf of the deceased veterans.

“Fortunately, the First Amendment also guarantees we are free to speak in a positive manner at military funerals,” explained Martin C. Boire, Chairman of Support Our Troops, Inc., in a press release. “Free to show our respect, our love and our gratitude for what has been done for us.”

Operation Honor Guard, the organization explains, will aim to “guard the honor and dignity of the ceremony in a positive, pleasant, memorable non-confrontational manner.”

Mr. Boire said “the moral equation is quite simple. These brave men watched out for us and our families, and we will now look out for them and their families. The youths whom a soldier has protected will now see him safely off.”

For example, SupportOurTroops.Org will arrange and, if necessary, pay the expenses of local high school bands “to line the roadside in full uniform and formation, each member with a small American flag on their band hat, softly playing wonderful traditional American songs as the family arrives for the funeral, as well as during the proceedings and departure.”

This will stand in contrast to, and is intended to buffer against, what the press release describes as “the undesirables who, acting for their own personal gain, have shamelessly and selfishly sought to intrude upon a painfully private and tender moment meant only for family and friends.”

A salute to this campaign.

And a prayer that it never need come to this community.