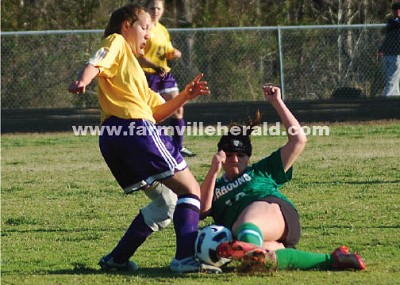 FARMVILLE – The Prince Edward County High School girls soccer team got off to a slow start against Park View on Monday afternoon, but a few in-game adjustments opened things up for the Lady Eagles, who cruised to a 6-0 home victory in their district-opener.

Prince Edward senior offensive center Kylie Dyer scored five goals on the afternoon, while junior center-midfielder Lauren Keup scored one, which was the first of the match.

“We're happy with this result,” said PECHS head coach Jason Crabtree. “We were bunching up at first, but changed things up a little, and that created some more space for our offense. The key to good soccer is good passing and moving the ball up the field.”

When the Lady Eagles did that, opportunities opened up.

Keup scored in the opening moments of the match, but it wasn't until the 34th minute that Prince Edward was able to score again. Dyer put the ball into the goal off of a deflection by junior forward Katrina Lowe.

Three minutes later, Dyer scored on an unassisted goal to give PE a 3-0 lead at the half.

A three-goal cushion at intermission would cause some teams to back into more of a defensive mindset, but Prince Edward (3-1, 1-0 SSD) kept the pressure up offensively, which led to very few opportunities for the Lady Dragons to get back into the game.

“We play best when we push,” said Crabtree. “If we think we're faster than our opponent, we'll try to push the whole time.”

Dyer added three second half goals. The first came on a direct kick from about 30 yards out in the 52nd minute, and the last two came in the final ten minutes of the match – a goal from the left side from about ten yards out and one in the 78th minute on a deflection.

Much like it has been since Prince Edward joined the Southside District, the major obstacle between the Lady Eagles and a district championship is Powhatan.

Prince Edward has been the most consistent challenger to Powhatan's SSD dominance, but the Lady Eagles have been unable to knock PHS off its long-held district perch.

For Prince Edward, the future is now in more ways than one. First, next year, Powhatan moves to the Charlottesville-based Jefferson District, but more importantly, as far as Prince Edward is concerned, the team is senior heavy.

Prince Edward's roster includes five seniors, including Dyer, and six juniors. It's an experienced team, to say the least.

“We have a lot of seniors and juniors, so this is our best shot at getting it done,” said Crabtree in regards to the district race.

In an effort to save money on transportation, and because girls soccer programs on the high school level are few-and-far-between in Southside Virginia, PE did play Powhatan and Bluestone in matches that didn't count as part of the district schedule.

“Once Powhatan got ahead, we started to work with some different lineups and formations. Hopefully, that will work to our advantage.”

“Their first goal came on a penalty kick. We got a little winded, and that's when they made their big push, so one of the biggest things we've been working on since that game is our conditioning.”

For years, it has been taken as a given that Powhatan will win the district, and the rest will fight it out for second place. That's not an expectation for Prince Edward.

“We don't set an acceptable goal. Our goal is to win and come in first place in the district. To do that, we're going to have to go hard and go strong in every game.”

Prince Edward, which defeated Nelson earlier in the season at home, will travel to Lovingston to face the Lady Governors on Friday, before getting back into Southside District play on April 4 at Nottoway.