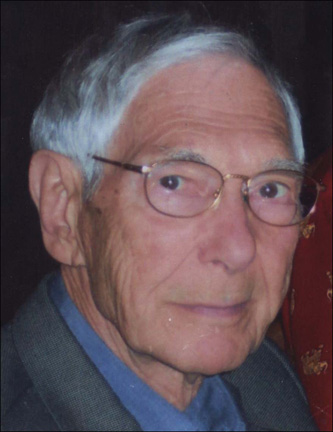 MARCH 22 – Harry Bernard Addleman, 93, of Farmville, passed away in his home on Friday, March 18, 2011, surrounded by his loving family. Mr. Addleman was born in Akron, OH, on March 31, 1917, to Harry Addleman and Madeline Thome Addleman. He was the beloved husband of Avis Kolanda Addleman for 62 years.

He was raised in Racine, WI. He was a WWII veteran, serving as a sergeant in the Army Air Force. He was stationed in Hawaii on Pearl Harbor Day. Mr. Addleman was an alumni of The University of Wisconsin. After a career in the book business he moved to Farmville in 1975 and was employed at the Social Security Administration until his retirement. He was a member of St. Theresa's Roman Catholic Church in Farmville, an avid golfer into his 90's. He traveled with his wife to places like Thailand, New Zealand, Greece, Turkey, and Africa and beyond. Always an avid reader, he was rarely seen without a book, newspaper or magazine at hand. He had an exceptional sense of humor that kept his family laughing.

Mr. Addleman's family would like to express their profound gratitude to Hospice of Central Virginia for their compassionate care.

A memorial mass was held on Monday, March 21, at St. Theresa's Catholic Church.

Donations may be made to St. Theresa's Catholic Church of Farmville, or to the National Alzheimer's Association.