Falcons Knocked Out By Hot-Shooting Bearcats 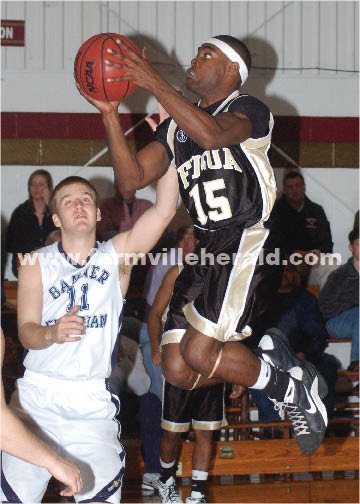 RICHMOND – Needless to say, Tuesday night's opening round game in the Virginia Independent Schools Division III Basketball Tournament wasn't how the Fuqua School boys basketball team would like to have gone out.

However, the Falcons' 77-44 loss to Banner Christian School (in a game played at Richmond Christian School) could've happened to most any team given how well the Bearcats were shooting.

“They hit everything, and we couldn't hit much,” said Fuqua head coach John Baldwin. “It seemed that every mental breakdown we had resulted in them hitting a three-pointer. Even when we defensed them well, they seemed to hit their shots.”

The Falcons (12-10) needed to look no farther than the final play of the first quarter to see that it probably wasn't going to be their night.

After leading for most of the first quarter, BCS senior guard Tyler Piper buried a contested 30-footer at the buzzer to give the Bearcats their first lead at 17-14.

Fuqua managed to keep the game close in the second quarter. Senior center LeVon Harper, who earlier in the night set the school record for points scored in a career, hit a hook shot that was followed by a three-pointer by junior varsity call-up Davis Cyrus to cut the Bearcats' lead to 22-21.

With 3:21 remaining in the half, Charles Williams scored to cut Fuqua's deficit to 25-23, but that was as close as the Falcons would get.

Several unforced turnovers on traveling calls seemed to disrupt the Fuqua offense, and when Williams drew his third foul, Banner Christian responded by ending the half with a 7-2 run to take a 32-25 lead at the intermission.

Fuqua quickly scored the first four points in the third quarter to close back to within four points at 32-29 at the 7:23 mark, but Williams drew his fourth foul with 6:38 remaining, which basically allowed Banner to put the game away.

“That's when everything turned for us,” said Baldwin. “We had made what looked to be the correct adjustments at the half, but when Charles drew that fourth foul, everything fell apart. He provides us with so much energy and intensity on the defensive end, and he is a good ball handler. He's difficult to replace.”

A free throw by Fuqua guard Jai Jamerson cut Banner's lead to 38-32 with 4:40 left in the third quarter, but Piper hit a three-pointer on Banner's next offensive series to kick-start a 20-2 run over the balance of the quarter.

Even with Williams in the game, things were already out of hand, and things weren't helped by the fact he had to play more carefully on defense.

By the time he put in a stick-back with 6:10 remaining, Banner held a very comfortable 61-36 lead.

Piper led all scorers with 28 points, including eight three-pointers, while TJ Payne added 17, and Kevin and Ben Moreland scored 14 and 10 points, respectively.

As a team, the Bearcats combined to shoot 11 three-pointers.

Harper ends his four-year varsity career at Fuqua as the school record holder in three categories. Early in the game, he broke the scoring record previously held by Andrew Potter, and finished with 1,849 career points. Over his four year career, he also pulled down 1464 rebounds and blocked 536 shots.

For the fifth-consecutive season, Fuqua's season ends in the VISBA Division III first round.

In addition to Wednesday night's contest being the final game for five FS seniors (Price Gantt, Harper, Michael Marquez – who was injured for the season, but spent the year as a student assistant coach – Cory Metts and John Todd Gantt), it was also the final contest for Baldwin, who will be leaving teaching to become pastor of Glenn Memorial Baptist Church in Prospect.

“I feel the Lord is leading me into the ministry, so for me it's bitter-sweet,” said Baldwin. “Especially with how we went out tonight, but I'm excited. It doesn't mean I won't miss being with these kids. They're so great. They're good athletes on the court, but great young men in life as well. I'll still be around to support them anyway I can.”