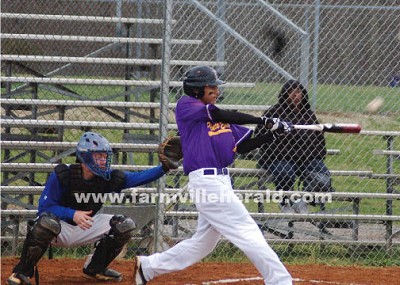 FARMVILLE – It's true that all good things must come to an end, but the same can be said about bad things.

For the Cumberland High School baseball team, which ended a 20-game losing streak on Thursday afternoon with a 9-6 victory at Prince Edward, the Dukes were starting to have their doubts.

Cumberland looked to be well on its way to consecutive loss No. 21, until the Dukes rallied for five runs in the top of the seventh to turn a 6-4 deficit into a three-run cushion.

“Twenty in a row before today,” said CHS head coach Duane Partusch, who registered his first victory as a varsity head baseball coach. “This should give them some much-needed confidence.”

For Prince Edward, it was seen as a missed opportunity.

“The seventh inning was the story,” said PECHS head coach Michael Weaver, whose team may not have had the burden of a 20-game losing streak, but is trying to find its own way back to winning baseball. “It was simple mental errors that killed us. We've been playing better than we have in recent seasons, but we can't give anything away.”

Things started out about as well as they could for the Eagles, who escaped a little bit of trouble in the top of the first, when leadoff hitter Jeremy Walker belted a towering home run that landed halfway up the football stands behind the centerfield fence.

The Eagles hopped out to a 3-0 lead, before giving back two runs in the top of the second.

Prince Edward pitcher Austin Reames settled down in the middle innings, as the Eagles built a 5-2 lead with single runs in the third and fourth innings. At one point between the top of the second and top of the fifth, Cumberland batters were unable to get the ball out of the infield, until Brandon Tyson lined a single into left field to score leadoff hitter Hunter Glover.

Reames tired in the fifth, but managed to get through the inning with no further damage. Meanwhile, Cumberland reliever Justus Dowdy took the mound in relief of starter Dylan Samuels in the bottom of the fourth and pitched the rest of the game very effectively.

Cumberland scored one run in the top of the sixth, when BJ Roach scored on a fielding error. The Eagles added an insurance run in the bottom of the sixth inning. Reames was hit by a pitch with two outs, and came around to score on a Noah Bowman single to give the Eagles a 6-4 cushion.

Three outs from loss No. 21, and a season sweep to their rivals to the South, the Dukes came alive offensively. Cumberland loaded the bases on three consecutive walks, and a two-RBI double by Dowdy gave Cumberland its first lead of the game. Two more runs scored when Roach reached base on an error, and on an RBI bunt by Bow Winbush.

Prince Edward managed to put two runners on base in the bottom of the seventh, but Dowdy sealed the victory with a strikeout.

“Dowdy has been a surprise for us thus far,” said Partusch. “He has thrown some good innings, and had a good outing against Bluestone. We had thought about starting him today, but we've got to be careful, especially this early in the season. He showed that he's a gamer today.”

“A first pitch home run is great to get,” said Weaver. “I'm happy for Jeremy. He happened to catch the ball right and smacked it. What didn't work into our favor was that it seemed like everyone else started trying to hit home runs after that. It's human nature, but when Jeremy hit the home run, he wasn't trying to do so. He was just trying to make contact.”

Both teams have shared common baseball fortunes of late, and they haven't been good. But both Cumberland and Prince Edward are starting to show signs of improvement.

“We're just so young,” said Partusch. “We're starting three freshmen and two sophomores, so over half of our team could be playing junior varsity. They're talented, but the freshmen don't have the varsity experience. They're nervous, which leads to mistakes.

“But they're driven, and they're playing with emotion. They're working to improve, and you can see that they really want to get better, and are doing what they need to do in order to get better.”

Prince Edward has a mix of youth and upperclassmen on a roster that numbers 17.

“For the first time in a while, we have a deep bench, with some first string-quality players who are on the bench,” said Weaver. “We have players who are wanting to get in to play, and that competition only will help us get better.

“I think the biggest thing that has helped us is the addition of the middle school team. Bruce Davis has done a great job with them, and some of those players are starting to work their way up into the JV and varsity ranks. They have the fundamentals, speed and pitching. It's exciting. I think we're starting to get to the point where we can become a solid team and remain solid year-in and year-out.”