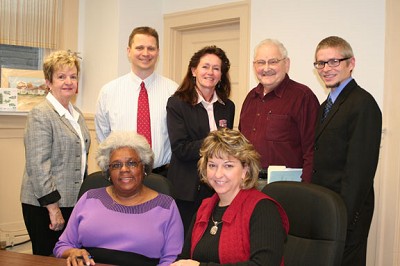 DILLWYN – Spring offers a time of renewal. Lawns are greening, forsythias are blooming and Dillwyn is readying to blossom.

Yes-Dillwyn is preparing for a transformation, one that promises to be much more than a seasonal change thanks to $663,640 in funds through a Community Development Block Grant.

The Virginia Department of Housing and Community Development recently notified the small town that its 2010 grant application for business district revitalization would be awarded.

Last summer, the town received word that its application for a community development block grant was not approved.

“We missed it by about 28 points,” stated Mayor Ervin Toney at council's July 2010 meeting.

Subsequently, over the last few months and after an intensive review of last year's application, Dillwyn has been working with the Commonwealth Regional Council to submit a new and improved application by the March 2011 deadline.

Then, the good news arrived. Another locality declined its award and Dillwyn was in line to receive CDB grant funds based on its 2010 application.

Work on the 2011 application came to a halt as plans to move forward with the revitalization of the Dillwyn's business district began.

On Friday, March 11, representatives from the Department of Housing and Community Development met with members of council and several business owners. Also on hand were Mary Hickman and Todd Fortune, planners with Commonwealth Regional Council, which will be serving as project administrator.

After congratulating the town on the grant award, Denise Ambrose, an associate director with the Virginia Department of Housing and Community Development, explained the reason for the face-to-face meeting.

“We want to make sure we understand what you want to accomplish; what your project, in your vision, is; and, talk about any questions or issues we had when we reviewed your application.” She added, “It is also a time for you to ask us any questions that you have.”

Ambrose continued, “We understand that a project of this nature and this size is a big undertaking for a small town. And we'll help you as much as we can along the way and so will Mary and Todd.”

Explaining all of VDHCD's funding is offered on a contractual basis, Ambrose said the town would need to sign a contract with VDHCD for the Community Block Grant funds.

“In order to get to that point there are a number of pre-contract items that we need the town to complete,” stated Ambrose. She added, “You will have 90 days to complete those items to get under contract and get going.”

Reviewing many of those items, Ambrose began by noting the location of the business district revitalization project is along U. S. 15 from the railroad crossing near the intersection of Route 1003 and 15 at Ranson Brothers Store to Route 629, Rosney Road.

She explained the purpose of downtown revitalization projects is to eliminate physical blight, remove barriers to economic revitalization, promote private economic investment, and redefine the town's economic base.”

Ambrose stressed, “This is to assist the town to become a stronger regional partner, improve the climate for local businesses and revitalize the area for your own residents and visitors.”

Encouraging council to revisit its economic restructuring plan that accompanied the grant application, Ambrose stated, “That is supposed to be a document that is used and becomes dog-eared from use. Use it as a guide to all the decisions you make to move the downtown forward.”

She recommended council plan a meeting with business owners to let them know that the town “really does have the money now” to move forward with the revitalization.

Ambrose said the meeting would be a time to explain the program requirements, revisit the property-owner participation agreements, talk about the design plan, and answer questions about the program.

In its grant application, the town targeted approximately 28 buildings for facade improvements within the project area.

According to Ambrose, a maximum of $400,000 of the grant funds can be used for the storefront program. The facade improvements include not only the storefront portion of the buildings but also other sides visible from U. S. 15.

During a discussion on the facade improvements, Mayor Toney asked about the property owner's required 50-50 match.

Ambrose explained that improvements made since July 1, 2009, may be used toward the match as long as documentation can be provided.

She said match-eligible improvements could include exterior and interior work and other upgrades.

Continuing, Ambrose explained that up to $100,000 of the grant funds may be used for the creation of a business loan pool for entrepreneurs. She said the low interest loans would be available to existing as well as new business owners.

Ambrose said that for every $10,000 a business borrows, it would need to create one job that is available to or held by a person of low and moderate income.

Grant funds would also be available for attracting businesses and private investment into town through branding and marketing, stated Ambrose.

“You take your assets and show them to the world. So you are going to develop a branding and marketing program to market Dillwyn to potential businesses, customers, and tourists,” she explained. “And that will be a component of your business recruitment strategy and your economic restructuring plan. So those pieces all fit together.”

Mayor Toney asked how long the town would have to complete the project once the contract is signed.

“You will have 24 months once you get under contract,” replied Ambrose. “Two years. And you will have a management plan to guide you along to let you know what milestones you need to reach in order to attain that completion.”

Matt Fitzgerald, VDHCD community representative who will be working with the town, reviewed the pre-contract items that need to be completed before the contract can be signed.

She stated, “Please keep your management team in tact and plan on a once a month commitment to meet and keep an eye on this project.” Peerman explained, “By doing so, you'll be holding all of your consultants accountable for what their deadlines are and you'll keep the momentum going.” She advised, “You have to keep an eye on it and you have to hold your folks to task.”

She reiterated that Fitzgerald would be the town's primary VDHCD contact. “He is a member of your management team,” she advised.

Peerman added that once a year VDHCD would do a formal compliance review, which would include every facet of the grant to ensure compliance with federal and state requirements.

Offering that VDHCD is working in partnership with the town, Peerman stated, “Your success is our success.”

Sharing what she described as a few common pitfalls to avoid, Peerman began with failing to hold management team meetings.

“Don't be insensitive to citizens' comments,” continued Peerman. “Always listen to the people who are going to be affected by the activity,” she added.

“Do not delay installing your project signs…so that people will know that monies have been invested in this area-taxpayer dollars,” stated Peerman. “It is really an announcement or kick-off to get people excited.”

As the meeting ended, Mayor Toney thanked everyone for attending. He stated, “And like I told Ms. Ambrose, this is like a belated Christmas gift.”

Toney continued, “At first we thought we'd missed this CDB grant. Then we got a letter around the first of February stating that we had received it.” He shared, “It is really a blessing.”

Since 1982, the Virginia Department of Housing and Community Development has administered the federally funded CDBG program. Most projects benefit low and moderate income individuals; and, many projects are targeted for the prevention or elimination of blighting conditions.