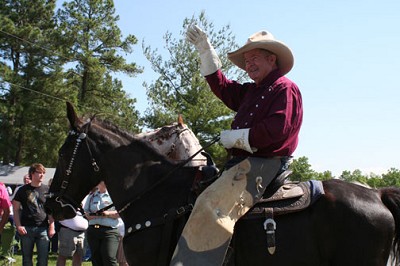 Yes Buckingham, plans are underway for the county's third celebration of the National Day of the American Cowboy.

In a team effort, the Tom Mix Rangers, Historic Buckingham Incorporated, and the Buckingham Chamber of Commerce will host this now annual celebration on Saturday, July 23, from 9 a.m. to 4 p.m. at the Historic Village at Lee Wayside.

Although many folks in this area are longtime fans of Captain Bob Toney and the Tom Mix Rangers because of their participation in numerous charitable events, they may be unaware that the Tom Mix Rangers participated in one of the first celebrations of the National Day of the American Cowboy hosted in Pennsylvania in July 2005.

That event led Bob and his son Mitch to begin thinking about a local celebration. After years of working with HBI during countless events at the Historic Village, both were well aware of the great backdrop the living history park would offer.

In 2008, Mitch shared their vision with Martha Louis. She readily admits she was unaware of the national celebration until Mitch showed her a copy of a national cowboy magazine highlighting all the annual American Cowboy celebrations held across the nation on the fourth Saturday of July.

Louis, in turn, took the idea to HBI and the Chamber of Commerce. Subsequently, in July 2009, the Historic Village successfully hosted its first National Day of the American Cowboy.

Last year's event was just as successful in spite of temperatures over 105 degrees.

Although plans for 2011 are being fine-tuned, Bob and Mitch, with their cowboy contacts, have corralled James Drury, The Virginian, as the featured guest for the weekend, and grand marshal for the parade that will open the July 23 celebration.

In the enduring spirit of Tom Mix and his Rangers, Bob and Mitch didn't stop with Drury. They have also called on a long list of re-enactors who will be converging on Buckingham that weekend including Tonto and the Lone Ranger, Lash LaRue, Chief Silverheels, John Wayne and many other known and unknown cowboys.

According to Louis, the Cowboy Day Committee has learned some valuable lessons with the last two events. Plans include expanding on the more successful activities. “More food, more fun,” she assured.

Louis said one of last year's most successful ventures was the Kids' Corral hosted by Sprouses Corner Ranch.

Thanks to the vision of Bob and Mitch Toney, two American Cowboys who shared their ideas and enthusiasm with HBI and the Chamber of Commerce, Buckingham now has an event that coincides with a national celebration.

Not only does the day honor and preserve America's cowboy heritage; but also, as the American Cowboy Magazine proclaims, it recognizes the cowboy and cowgirl “for their enduring contribution to the courageous pioneering spirit of American.”

For more information and/or to volunteer to help with Cowboy Day call (434)969-4355; or www.leewaysidevillage.com