Closing In On Perfection 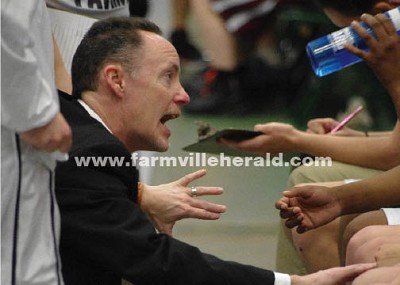 Like most teams, the Amelia Academy girls basketball team looks forward to game night. But for the Lady Patriots, it might be because they get a night off from their intense practice schedule.

All the drills and intense scrimmages have paid off for the team, which will begin play in the Virginia Independent Schools Basketball Association Girls Final Four to be played this weekend at Benedictine High School.

In addition to vying for the school's first state title in girls basketball, the Lady Patriots will look to cap the season with an undefeated record.

“We never thought about the possibility of an undefeated season until we went unbeaten in the Fuqua Christmas Tournament,” said third-year Amelia Academy head coach Frank Shanaberger. “Our original goal was to win the VCC and work our way into a first round bye in the state tournament. After the Fuqua tournament, we set a second goal of going undefeated in the regular-season, and winning the VCC Tournament.”

Now, the Lady Patriots (26-0) set out on a third goal. A much bigger one of making the State Tournament Championship game, which would surpass their 2007-08 VISBA Division III Final Four appearance.

“To be quite honest, I haven't been able to sit back and think about the season, because we're always concentrating on the next game,” said Shanaberger. “Fortunately, the girls have had Megan Carney who was on the 2008 Final Four team, helping us as a coach this year. She's stressed to the players how special this season is, and how they need to enjoy it.

Amelia Academy's approach to the game of girls basketball is evident in pregame warm-ups. While other teams are taking turns practicing free throws one at a time, the Lady Patriots are working on high-intensity defensive drills. That's a precursor of what's to come – a quick, trapping pressure defense that leads to fast-break opportunities on the other end.

“We have this one drill we work on where after a made shot or a defensive rebound, we look to be in a position to score in three seconds. We're not strictly a run-and-gun team, but we do look to see if we can score either on the first or secondary break. We will work in a half-court offense when we need to, and do it well, but we want to get up and down the floor as quick as possible, regardless if it's on defense or offense.”

The Lady Patriots aren't an overly-deep team. Only ten players are on the varsity roster, but what they lack in numbers, they make up for in quality depth.

“We have seven players to choose from that are capable of starting, which leaves two having to accept a role maybe they weren't accustomed to prior to this year, but they've done so, and are ready to go in and contribute when their name is called.”

Amelia Academy is led in scoring by junior Lauren Vugteveen, a transfer from Midlothian High School, who is averaging 15.9 points per game. She also leads the team in blocks (2.6 bpg.), and is second in rebounding (12.5 rpg.).

Junior Amara Ezell was a first-team James River District selectee as a freshman, and garnered first-team honors in the Jefferson District at Goochland, before transfering to Amelia Academy. She's averaging 15.0 ppg., and leads the team in rebounding (12.5) and steals (4.4). Ezell was named the Most Valuable Player in last weekend's Virginia Commonwealth Conference Tournament.

Russian exchange student Dasha Sorokina averages 9.6 points per game, and has been on the team for the last two seasons.

The Lady Patriots have some home-grown talent, as senior point guard Lexi Pemberton leads the team in assists (5.5), and is averaging 8.5 points per game.

Sophomore Kristyn Carney, younger sister of Megan, who has been in the AA system since eighth grade, is averaging 12.3 points per game, and is 62-166 (37 percent) from behind the three-point-line.

The Lady Patriots are averaging 73.3 points per game, which is first in the state, according to Maxpreps.com, and is among the top-ten in several team statistical categories.

“The girls just want to win,” said Shanaberger. “They're not really concerned about individual stats.”

Prior to moving to Amelia Academy, Shanaberger coached varsity boys basketball at Fuqua School. Not surprisingly, he admits that coaching girls is different than coaching boys, but it's a difference he enjoys.

“The main thing I've noticed is that the girls will do any drill no matter how difficult or how easy, and not question it. The guys want to scrimmage more, and may think a drill where you have them dribbling all the way down the court with their off-hand is beneath them. The girls don't seem to mind the drills as much.

“I don't anticipate going back to coach boys. I enjoy it. There's not as much drama.”

Despite the undefeated record, and their No. 2 seed in the Division III State Tournament, the Lady Patriots enter a game as the underdog for the first time this season. On Friday afternoon, AA will play Williamsburg Christian – a team that's 22-7 on the season, but has tested by a difficult schedule.

Williamsburg is no stranger to the Final Four, having lost in the title game last year to this year's No. 1 seed Miller School (22-4).

“In talking to some coaches who have seen us and Williamsburg, they seem to think we match up well, and it's a toss-up. There's no way of knowing until you play the game, but if we were to play ten times, it's difficult to say who would come out on top.”

One concern Shanaberger has going into the Final Four is how his team will react to playing a four-quarter game. Prior to Wednesday night's game, the Lady Patriots' closest margin of victory has been 20 points. The starters have sat out considerable time in the second halves of almost every game this season. Ezell, Pemberton and Vugteveen have sat out the entire fourth quarter in at least seven games, with Ezell not seeing action in nine fourth quarters.

“I'm not sure how we'll react to having to play a four-quarter game in a game situation. We do work on simulating four-quarter games in practice, but things always work out differently when you get into a game.”

Miller should be waiting the Amelia Academy/Williamsburg Christian winner on Saturday.

“We're going to have to play our best game of the year, and make sure we don't get into foul trouble. I think we can run with either team, but if we have to get into a half-court game, it won't benefit us. We'll use our full-court press, run at them, and make adjustments as they're needed.”

About the possibility of getting to set a fourth goal?

“That's the thing about getting to the state finals. If we lose, we get to say that we lost to the state champs. If we win, we'll go down as a team that won the state championship and completed a perfect 28-0 season, but we'll worry about that goal if we get the chance to set it.”

Editor's Note: Shanaberger is a former writer for The Farmville Herald, and in his spare time, provides play-by-play coverage of high school football and Dixie Youth Baseball for Herald partner WVHL 92.9 FM.

Falcons Knocked Out By Hot-Shooting Bearcats