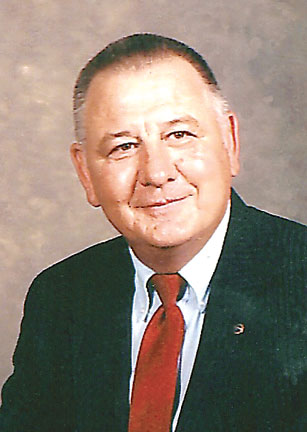 I do not need any recognition because people have been good to me and I have had my day in serving the people of this community. ~ EJL

Edward Jackson LeSueur, 74, of Dillwyn, and Funeral Director of Dunkum Funeral Home for 54 years, passed away on Friday, December 3, 2010. He was born to Mary Jamerson LeSueur and Joshua Jackson LeSueur on December 2, 1936, in Buckingham. He was preceded in death by his parents, and his brother, Ivan Lee “Pokey” LeSueur.

He joined the Dillwyn Volunteer Fire Department in 1957. He was the current President and had served as President of the Fire Department since 1972. He was also Vice-President before assuming the role of President in 1972. Before the County had a central dispatching center, Edward and Shelton Foster dispatched for the Fire Department and Rescue Squad by telephone for the entire County-this was before radios, monitors, and other means of communication were available.

Mr. LeSueur became a member of the Dillwyn Town Council in 1962. He served as Mayor of Dillwyn for six years (1974-1980). He resigned as Mayor when he ran for the Buckingham County Board of Supervisors and was elected in 1980; he served on the Board until 2004. He also received his 20 year pin from the Virginia Association of Counties.

Mr. LeSueur served 16 years on the Board of Directors for the Lions Club. For two years, he assumed the role of President and served five years as the Vice-President. He organized the Buckingham County Day Parade from 1974 until 2000. During the Christmas season, he took it upon himself to decorate the Town of Dillwyn each year. Just recently, he honored a 100-year-old community member by hosting a birthday party.

Edward Jackson LeSueur was a giver, provider, and caretaker with a total of 44 years of service to the Town of Dillwyn and the County of Buckingham. He was also a faithful member of First Baptist Church in Dillwyn where he had served as a Deacon.

Funeral services for Mr. LeSueur were held December 7 (today) at Dunkum Funeral Home with interment in the Dillwyn Town Cemetery.