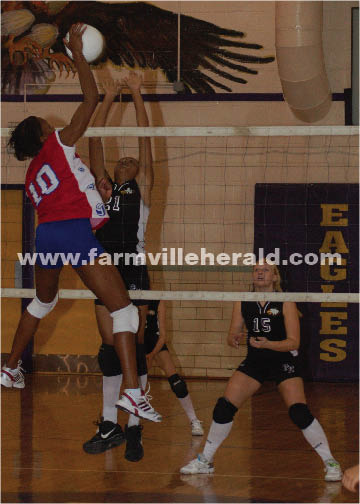 FARMVILLE – Unlike every other volleyball team that has traveled to Prince Edward County High School this year, the Southampton Lady Indians didn't let the PE's homecourt advantage intimidate them in a Thursday night straight-sets road victory.

Prince Edward had trouble adjusting to the height-advantage and power game of Southampton – especially middle hitter Regina Artis, who was not only a hard hitter, but an accurate one as well.

“They got on us from the start,” said PE head coach Bruce Bogese, whose team had been undefeated at home until Thursday night. “They hit the ball a little harder and hit better than most of the other teams we've played. It's hard to prepare for what they do. I thought we were in the right frame of mind coming in, but Southampton took us out of it.”

After taking the first set on the chin, Prince Edward (9-4, 5-3 Southside) adjusted to Southampton's power style, and managed to keep things close in the second and third set.

A kill by Tia Snydor tied the second set at five-apiece with her second kill in a three-point span, and Prince Edward was able to stay close – trailing 16-13, before Southampton reeled off seven straight points to take control of the second set.

Prince Edward fell behind 7-0 in the third, before chipping away at the Lady Indians' lead. Allison Dalton registered a couple of kills, and scored an ace that managed to pull the Lady Eagles to within a point at 15-14, before Southampton, again used a mni-run to take a 21-15 lead.

Prince Edward closed the set to 23-20 on a kill by Snydor, but could get no closer.

“I was pleased that we hung in there in the second and third sets,” said Bogese. “They were substituting, and I don't think [Regina] Artis played in the third, but there's not much fall-off on their team. We could've just as easily have lost those two sets 25-3 as well.

“We're just going to have to jump a little higher, move a little quicker and pass a little better next time.”

Prince Edward was scheduled to travel to Park View on Tuesday, before returning home to face Bluestone on Thursday.

The Lady Eagles have gone once through the district schedule, and are in contention for one of four playoff spots for the Southside District Tournament.

“Halfway though, we're hanging in,” said Bogese. “We get Bluestone at home, and that's going to be big to see if we can get a split there, but there's not much difference between us and Nottoway, Greensville and Park View. We've got to go to them in the second half of the season. We'll need to continue to improve, because we know they're doing the same.”

The Cumberland High School football team was able to get some semblance of a running game going in its homecoming... read more