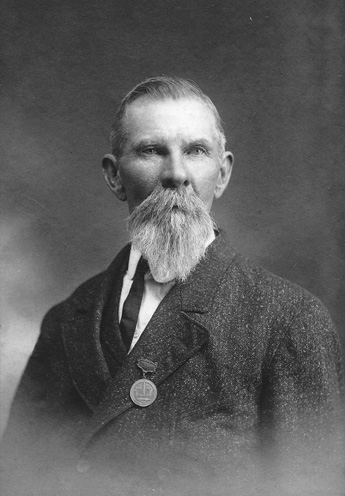 FARMVILLE – Wayne Cook has a letter written by his great grandfather Thomas H. O'Brien from Buckingham County preserved in the den of his Richmond home.

It's in a sealed two-sided frame.

“…I always thought it was pretty neat…I've shown that to everybody that set foot in my house, I think,” he said in a recent interview.

Now, through the Sesquicentennial Civil War 150 Legacy Project, it will become permanently archived with the Library of Virginia.

“In my parents bedroom there was a little washstand and it had a little…box on it kind of thing…This letter was in that for the longest kind of time,” Cook said. “And I don't know how daddy ended up with it-I assume that grandma gave it to him.”

It's its own mystery. A letter was written to a newspaper editor and, though slightly different, was printed. The question remains, however, if it were printed, why is it still in the family?

Whether it's a copy or a first draft or some other reason may never be known but it, nonetheless, offers a cracked door personal glimpse into the war.

O'Brien served as a Private in Company C, 3rd Virginia Regiment, of the Confederate States of America. A then 18-year-old, he joined in May of 1861.

O'Brien was a foot soldier in history, but his written words in a letter addressed to the editor of the Richmond Times Dispatch in 1915 etch something more permanent than vague family stories that have a way of changing when handed down through generations.

The spoken word can, and often does, change over generations-should those stories survive at all. The written word has its own permanence.

It simply is what it is.

“Three miles from Beverly I received my first experience of war-that is one man shooting at another to kill, O'Brien wrote. “The Yankees got the best of us, owing to numbers killed, wounded and captured the most of our company. I was among those who came out under Major Tyler. My company disbanded. I joined the Second Company from this county, G. B. Haynes. My company then was Company A, 57th Regt., Armstead's Old Brig., Pickett's Division. We was called Pickett's foot calvary. I was in all the engagements that Pickett's command was in from 1862 to April first 1865.”

“That it existed, I mean that it's still around…,” Cook says, when asked what he finds the most fascinating part about the letter.

The legacy project aims to locate original family-owned print materials related to the Civil War period (though not necessarily connected to the war itself) not previously published, scan them, and make them accessible through the Commission and the State's Library.

While the legacy project is just getting underway, it aims to include such things as maps, pictures, diaries, military passes/discharge papers, photographs, sketches and, of course, letters like O'Brien's.

Documents, once into the system, will be accessible within three weeks for the most devout family researchers and curiosity seekers alike. It could be a treasure trove for those who simply can't get enough history.

“One of the purposes for this legacy project…is that these letters, all of these documents, are going to start deteriorating,” cited Magi VanEps, the Tourism and Visitor Center coordinator for Prince Edward and staff member on the Tourism Advisory Board and local committee.

If they can be scanned and placed into the Library of Virginia, she notes, then they'll be there.

“And it'll provide people an avenue that they may not (have) had before where they can go to the site and see this letter scanned as they're doing research,” said Cindy Morris, the Town Planner who also serves on the Tourism Advisory Board and local committee representing the Town.

After the war, O'Brien-according to family printed sources-went to work as an apprentice in carpentry. (Ms. Morris, who is related, has some pieces he made), married Elizabeth Bagby (1870) and the two had a large family. He lived at Patteson Tavern, near New Store in Buckingham County, and was a member of Chestnut Grove Baptist Church. He was-in modern day terms-a paramedic of sorts, helped start the church Sunday school there and served as its first superintendent.

“I see I'm not the youngest, but I defy the boy that saw more hard service than those of us that composed Pickett's Foot Calvary,” O'Brien reflected in the 1915 letter. “I never was put on double duty or in the guardhouse or excused from duty but once and that but for a short time for diarrhea while on the lines near the Howlett House. I still enjoy a reasonable portion of good health. I have the rheumatism a little in one knee and could relate a good many close places I was in and a good many anecdotes.”

We can only wonder at the stories he could have told.

That O'Brien survived is remarkable. That he was in the heart of a battle like Gettysburg, and made it nearly to the end of the war (April 5, 1865) before being captured near Dinwiddie Courthouse along with 1,100 men and sent to Point Lookout prison in Maryland, is perhaps even more so. Not everyone who was sent to Point Lookout survived the experience.

O'Brien, perhaps, is a footnote in history to some, but a lasting legacy to others. Three of the people seated at the interview table-Cook, his brother Edward, and Ms. Morris, are all descendants that would not be here had he not survived the war.

Virginia's Sesquicentennial of the American Civil War Commission is a five-year celebration. The local preservation project is being headed up by a Sesquicentennial Committee, which is a branch of the Farmville/Prince Edward Tourism Advisory Board. The committee is hoping to have at least one event a year.

As Virginia celebrates its history through the Sesquicentennial Commission, it aims to look at the war from every aspect-looking at it from Confederate, Union and African-American perspectives.

Anyone with original materials who would like to have their documents preserved is invited to contact the Heartland Regional Visitor Center to schedule an appointment (call 434-392-1482). The legacy project team will be at the Farmville-Prince Edward Community Library meeting room on Friday, November 5 from 3-7 p.m. and Saturday, November 6 from 10 a.m. to 4 p.m.

Items must be owned by those presenting the materials and written permission must be granted for it to be posted on the Internet. Once the scanning process is completed, owners can take their original documents home with them. There is no cost to preserve the documents; photocopied items and/or subject to copyright law may not be submitted.

BUCKINGHAM – On Saturday, October 9, there's going to be a Motorcycle Run to benefit Krissy Stearrett, a young teacher... read more