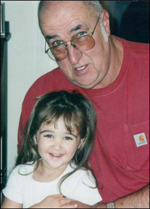 Born September 13, 1941, he was the only child of the late Elmira Elizabeth McCourt Chernault and Raymond Barksdale “Boo” Chernault.

An alumnus of Ferrum Junior College (1963) and a 1961 graduate of Prince Edward Academy and Worsham School, Mr. Chernault worked for the Virginia Department of Transportation (VDOT) at Green Bay and Hampden-Sydney for over 40 years. He considered his co-workers as part of his extended family and made life-long friends that he cherished.

Like his father, “Boo”, one of Johnny's passions was farming. He loved working hay and corn and raising beef cattle. Between farm chores and Nancy's “honey-do” list, there was never any “down-time” on the farm.

Johnny was devoted to his wife Nancy of 40 years. He never missed an opportunity to tell friends, family and strangers how he found the best woman ever.

The past seven years of his life were made especially sweet by his granddaughter, Rachel. No matter how Johnny's day was going, seeing his “Sugar” always brightened his day. She was a glittering star in his eyes and he looked forward to getting her off the school bus every day so he, Rachel and Nana (Nancy) could work on homework, spelling words, or feed the cows. Johnny had just finished teaching Rachel how to drive the E-Z-Go. He made sure that everyone knew Rachel was one of the sweetest gifts he was ever given.

Survivors include his wife, Nancy Ann Bryant Chernault; two children, Danielle Renee Chernault and significant other, Jamie Walters of Herndon, and Raymond Leonard Chernault and wife (whom Johnny considered a daughter), Billie Jo of Worsham and a granddaughter, Rachel Lynn Chernault of Worsham.

Services were held Monday, October 11, at College Church Hampden-Sydney. Interment was private. By Johnny's request, he will be buried on the family farm – the land he loved.

Puckett Funeral Home, Farmville, was in charge of arrangements.