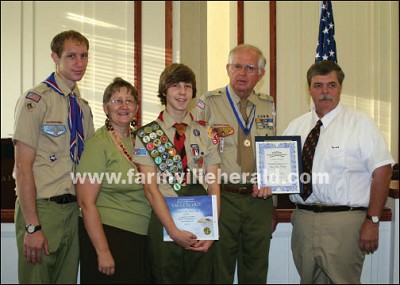 BUCKINGHAM – A Court of Honor and Eagle Scout presentation is always a special event for both the scout and his family.

After all, Eagle Scout is the highest rank attainable in Boy Scouts. To achieve Eagle status, a scout must earn at least 21 merit badges. Moreover, he must demonstrate the Scout Spirit through the Boy Scout Oath and Law, service, and leadership. He is also required to complete an extensive service project that he not only plans and organizes but also leads and manages.

Is it any wonder that only about five percent of scouts achieve the prestigious title of Eagle Scout?

On a recent Sunday in Buckingham, the DeGering family experienced the unique opportunity of watching their fifth Eagle soar when 14-year-old Hyrum, the youngest member of the family, received his Eagle Scout.

For Spencer Adams, scoutmaster for Buckingham BSA Troop 6535, Hyrum took the number of young men he has helped make the Eagle flight to well over 50.

During the Eagle presentation, Thomas Clayton, president of the Buckingham Branch of the Church of Jesus Christ of Latter Day Saints, shared congratulatory letters from the BSA Heart of Virginia Council and the BSA National Council.

Along with praising Hyrum for his achievement, the local council encouraged him to continue to uphold the attributes of scouting and to use them to help form the cornerstone of his personal code of conduct.

The National Council offered, “Eagle Scouts exemplify hard work and strong character.” The letter continued, “The Eagle rank is the beginning not the end of your journey.”

Speaking on behalf of Historic Buckingham, Incorporated, Martha Louis thanked Troop 6535 for their interest in the Historic Village at Lee Wayside.

Hyrum is one of several scouts who have helped enhance the Village with their Eagle Scout projects.

Louis talked about Hyrum and his family coming to the Village to help as volunteers during Christmas and other special events.

“You wouldn't have recognized them because they were all re-enactors,” she stated. “They are part of our scrapbook forever.”

Louis shared how Hyrum spent many hot summer days scraping and painting two of the oldest buildings at the Village.

Referencing the wood boxes Hyrum built for the Village as part of his project, Louis offered, “They are going to be wonderful because all of our buildings are heated with wood.” She added, “We really appreciate it and on behalf of Historic Buckingham, I say thank-you.”

Before providing an overview of Hyrum's accomplishments, Adams shared, “I personally find him to be one of the most caring individuals I have ever met. It's indeed a real honor to be here tonight as his scoutmaster.”

Adams said that in the school setting, Hyrum participates in the Odyssey of the Mind competition; scores 600 on a number of his SOLs; and maintains honor roll status. He is a recipient of the President's Educational Award for Academic Excellence and was recently honored for his outstanding contributions to the middle school's Color Guard. For eight seasons, he has played soccer in the county's program.

“Here in this church he is a teacher; he prepares and passes the sacrament,” said Adams. “He is a member of the Aaronic Priesthood and he is about to start seminary. He is looking forward to his mission at 18. And after his mission he plans to go to school to study art and writing, aiming for a career in journalism.” Adams continued, “He has earned the Duty to God religious award for his faith.”

Discussing the work involved in Hyrum's Eagle Scout project, Adams said that along with the scraping, priming, and painting, Hyrum also oversaw a lot of repair work on the two buildings.

According to the Scoutmaster, the project involved the Andersonville Post Office, which dates back to the 1850's, and the Union Grove School, which is on the Civil Rights to Education Trail.

“Hyrum also organized the building of a number of wood boxes,” said Adams, adding that a large wood box was built for the cooking area.

Adams said Hyrum, as a Cub Scout, earned its highest award, the Arrow of Light. As a member of Troop 6535, Hyrum has served as a patrol leader and senior patrol leader.

He was selected for membership in the Order of the Arrow, which Adams described as scouting's honor society.

On his journey to Eagle, Hyrum earned 30 merit badges; and, received the World Conservation Award. He is also a member of the BSA Venture Crew 6535, and participated in a 20-mile hike along the Appalachian Trail.

“The record is terrific,” stated Adams. “It really is and kind of fits the record of his brothers.”

Continuing, Adams offered, “Hyrum is the fifth Eagle Scout in his family. That is phenomenal. And a lot of the credit goes to mom and dad, it really does.” He added, “There has to be a commitment on the part of parents to see them achieve the things like this young man has achieved.” Adams assured, “The results will pay off for the rest of their lives.”

With Hyrum standing before him, Adams gave the Eagle Scout Charge. He offered, “You have been judged by the Boy Scouts of America to be worthy of this honor. All those who know you rejoice in your achievement. Your position as you know is one of honor and responsibility. You are a marked man. As an Eagle Scout you have assumed a solemn obligation to do your duty to God, to Country, to your fellow scouts, and to mankind in general.”

He continued, “America has many good things to give you and your children after you. But these good things depend for the most part on the quality of her citizens.”

Adams stated, “I charge you to undertake your citizenship with a solemn dedication. Be a leader but lead only toward the best. Lift up every task you do and every office you hold to the high level of service to God and your fellow man. So live and serve that those who know you will be inspired.”

As Hyrum's mother, Rebecca, joined them at the front of the church, the young Eagle Scout pinned a replica of his Eagle insignia on her necklace-like ribbon that already included an Eagle pin and an Arrow of Light pin for her four other sons.

After Adams presented his troop's newest Eagle with his Eagle pin and certificate, Hyrum presented his brother Spencer with a mentor award.

Adams explained that in the absence of Frank DeGering, who recently relocated to Utah for employment reasons, Spencer, the next to the youngest son, played an influential role in Hyrum's life not only as a big brother but also as a mentor during the absence of their father.

Hyrum also presented Adams with a mentor award. Accepting the honor, Adams offered, “He makes 50-something.” He added, “Every one of them has a place right here in my heart.”

Steve Amos, worshipful master of Masonic Lodge 242, which sponsors Troop 6535, presented Hyrum with a certificate of recognition from the Grand Master of Masons in Virginia.

Concluding the ceremony, Clayton offered his congratulations to Hyrum, his family, and to Troop 6535.

He stated, “It takes a lot of folks in the community to make the scouting program a success. And you have witnessed some of those this evening.”

Referencing Rebecca DeGering's scout “jewelry,” Clayton stated, “It is not very common that you have a mother that has five sons make Eagle Scout. You should feel honored and blessed. And, we congratulate you on a great job as a mother.” He added, “It takes a good mother to make a boy an Eagle Scout. And it takes a good father, too.”

Clayton also thanked and praised Adams for his commitment to the scouting program.

“Our church really encourages and promotes the scouting program.” She explained, “They do that because they know that scouting is so worthwhile.”

Rebecca shared that when their first son was old enough for Cub Scouts, both she and her husband Frank became leaders. That parental and family involvement continued with all five sons and their daughter, who was active in Girl Scouts.

Granted, the support of the church is a factor. Likewise, family involvement is crucial. But, what's the real secret for making sure that young men don't lose interest or get off that Eagle trail?

Rebecca smiled and willingly offered, “Okay, here's the trick. All my boys got their Eagle Scout between the ages of 14 and 15.” She explained, “The minute they hit 16, they can drive, they are totally wrapped up in sports, they are interested in girls and everything else goes out of the way.”

She continued, “Once they get the freedom of the wheels, it seems like your control of getting them to go to scouts is limited.”

Rebecca said that once her sons received their Eagles, they continued in scouting but were able to do so in a more relaxed mode. She added, “And mom wasn't pressuring them.”

She said she and her husband also made sure scouting was fun. “Our family's number one rule is to have fun. My kids don't mind work projects because we work together-we laugh and joke and it's fun.

For an example, she offered, “Just like doing dishes. We don't make one child go in there alone and do dishes. I assign them in pairs-they laugh and joke and throw water on each other but the dishes get clean and it's fun.”

Rebecca added that having the older siblings as role models was also beneficial. And, the boys helped each other.

“Being involved in scouting as a family made it like a family goal.” She reiterated, “And, we made it fun.”

With her contagious laughter, she offered, “With Hyrum, all I would have to say is do you want to be the only brother that doesn't have your Eagle. So that was a motivation, too.”

Since the inception of the Eagle rank in 1911, approximately two million young men have earned the title of Eagle Scout, a title they hold for life-Once an Eagle, always an Eagle.

Hopefully, with leaders like Spencer Adams and scouting families like the DeGering's, Eagles will continue to proliferate.