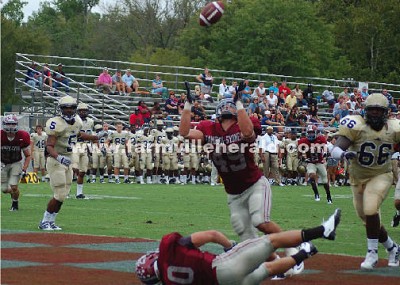 Tigers Get Defensive In Win Over NC Wesleyan

HAMPDEN-SYDNEY – When a reputation gets placed on something, it's usually a tough thing to shake.

Hampden-Sydney's defense during the early years of the Marty Favret era had a reputation for giving up yards and points.

The Tigers went a long way to shedding that reputation in Saturday's 21-19 victory over NC Wesleyan.

Hampden-Sydney (2-0) built a 21-6 advantage at halftime, and was shut out over the final two quarters, but the Tigers managed to hang on for the victory when NC Wesleyan (0-2) failed to convert on a two-point conversion attempt.

North Carolina Wesleyan co-quarterback, Jordan Van, capped the late-game drive on a six-yard run to pull the Battling Bishops within two points. The Tigers, however, escaped with the victory when Teron Bush's Tim Tebow-style jump pass fell through the hands of a wide-open Taylor Revelle.

A little luck that capped a day of strong defensive play and struggles on the offense.

“I think it was really noticeable last year,” said H-SC head coach Marty Favret on the emergence of the Tigers' defense. “We've got some great layers on the defensive side of the ball, where we don't have to get into shoot-outs.”

“When we saw that we weren't having that good of a day on offense, we knew that we were going to have to step up,” said H-SC senior safety Bill Doody, who had two interceptions on the afternoon – including a touchdown-saving pick on the goal line midway through the fourth quarter with H-SC clinging onto a 21-13 lead. “We can give [the offense] some confidence, where they don't have to feel like they have to score every time they get the ball.”

Doody saved a touchdown on one end, and earlier in the game on the other end, senior defensive end Will Riggenbach scored a touchdown for the Tigers. After a punt pinned the Battling Bishops in the shadow of their goal line, Trevor Ikwild batted a Van pass attempt into the air, where it landed in the outstretched arms of Riggenbach in the end zone. The touchdown gave the Tigers a 21-6 advantage with 1:09 remaining in the first half.

It turned out to be a key moment, as Hampden-Sydney junior quarterback Travis Lane was having trouble against the NC Wesleyan front line from about midway through the second quarter on.

After giving up two relatively easy scores (a six-yard pass from Lane to Cavanagh in the first quarter and a 20-yard pass to Kyle Vance early in the second), NC Wesleyan's defense started to pressure Lane. It worked, as the Bishops forced Lane to throw five interceptions – including one early in the fourth quarter that was returned 21 yards by Desmond Joyner for a touchdown to pull the Bishops to within eight points at 21-13.

The H-SC defense countered with three interceptions of its own on the afternoon. Shane Clarke, on the Tigers' special teams unit, blocked a 33-yard field goal attempt in the second quarter.

For the afternoon, Kirk Rohle led the offense in rushing with 118 yards on 24 carries, while Chris Shembo had 33 yards on seven touches.

Ikwild had 15 tackles on the afternoon, while August Berling had 12 and Doody had seven tackles to go along with his two interceptions.

“Right after the game, I took a quick poll of my guys and asked them if there were anyone there who didn't think we were going to win that game, and nobody raised their hands,” said Favret. “These kids expect to win games, and that goes a long way when you get into tight games like this.”

Hampden-Sydney remains at home this weekend to face Sewanee at 1 p.m. on Saturday