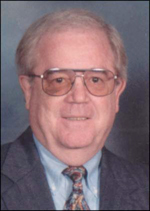 SEPTEMBER 16 – Ronald Gray “Ronnie” Lawhorne, of Farmville, died Wednesday, September 15, 2010. He was born in Lynchburg, on August 28, 1934, to Clarence Wiley and Lula Allen Lawhorne and moved to Farmville at age four. He loved growing up in Farmville and told many wonderful stories about “the good old days.” As a teenager, he worked at The Farmer's Supply and lifeguarded at Goodwin Lake.

Mr. Lawhorne graduated from Farmville High School in 1953, served in the National Guard and attended Virginia Tech where he played in the Highty Tighties, until he enlisted in the Army, and was stationed in Washington and Alaska. He played the trombone in the Army Band and when Alaska became a state in 1959, he played for the inauguration of the first governor. While finishing school at RPI (VCU) with a B.S. Degree in Business, he worked for Liggett Myers Tobacco Co. in Marketing and for H&R Block. From 1963 to 1967, he worked as Assistant Business Manager, then Business Manager, at Longwood College. He was the Vice President of Finance and Business Manager for Hampden-Sydney College from 1967 to 1978. He later obtained his realtor's license, and worked with Longwood Realty, then opened Virginia Realty in Farmville. He also managed Wedgewood Country Club, Roses, and Pegasus Auto Rentals. After retirement, he enjoyed spending time with his buddies at East End Chevron.

He was a member of the Farmville United Methodist Church for 72 years, where he sang in the choir for many years. He was a Past President and Lifetime Member of the Farmville Jaycees, Vice President of the Virginia Jaycees, and he received the Distinguished Service Award for his volunteer work and unselfish commitment to our community. He was a founding Board Member and Treasurer of Wedgewood Country Club, an Honorary Deputy for Prince Edward County, and a brother in SAE Fraternity.

He loved the game of golf, and enjoyed teaching his children and grandsons the rules and etiquette of the game. He enjoyed telling golf stories and was especially proud of his Hole-In-One on #9 at Wedgewood. He was a very good athlete, played football and baseball, and was on a state championship basketball team in high school. He was a loyal Redskins fan, a Dodgers fan, and a UVA fan. Mr. Lawhorne was an avid photographer and loved music – he was a talented self-taught trombone, clarinet, banjo, bass, ukulele and harmonica player. He had a beautiful voice and loved to sing.

Mr. Lawhorne was a thoughtful, loyal and good friend. He had a generous heart and was always ready to help a family member or friend in need. He had a sharp wit and loved to laugh. He was so easy to talk to and he made people feel special. He will be greatly missed.

He is survived by his wife, Rita Weinberg Lawhorne; a daughter, Judy L. Ellington and husband, Johnny; a son, David Allen Lawhorne; grandsons, Trey Grayson Ellington and Jason Taylor Ellington, all of Farmville; a sister, Barbara L. Hawkins of Richmond; a brother, C. W. Lawhorne Jr., and wife, Margaret (Monnie) of Lynchburg; a sister-in-law, Frances Lawhorne of Lynchburg, and many special nieces and nephews. He was preceded in death by his parents, a brother Maurice T. Lawhorne and two sisters, Mildred L. Morton and Kathleen L. Holland.

There will be a visitation at Puckett Funeral Home on Saturday, September 18, from 6:30 to 8 p.m.

A funeral service will be held at the Farmville United Methodist Church on Sunday, September 19, at 2 p.m. with interment to follow at Westview Cemetery.

Memorial contributions may be made to the Farmville United Methodist Church or Hospice of Virginia.