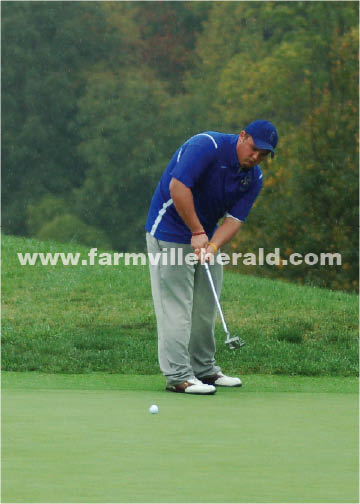 FARMVILLE – Randolph-Henry cruised to its 11th-consecutive James River District Golf Championship in a steady rain at The Manor Resort on Wednesday. The Statesmen turned in a team score of 356, 44 shots better than second-place finisher Amelia County.

Randolph-Henry and Amelia advance to the Region B Golf Tournament at the Shenandoah Valley Golf Club in Front Royal on October 5.

Amelia edged Central of Lunenburg (403) by three strokes, while Cumberland turned in a team score of 425, with Buckingham posting a 475.

Randolph-Henry senior Jake Back captured medalist honors with his 42-42-84 on the par-72 layout.

John Brandt of Cumberland and Sam Back and Dillon Webber of Randolph-Henry each carded scores of 95 on 18 holes, while Will Morgan (96) and Kayla Busic (97) of Amelia and Trey Chandler (97) rounded out the second-team.