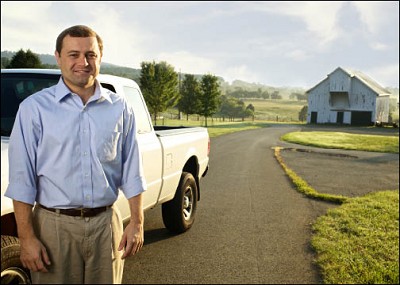 FARMVILLE – The race for the House of Representatives Fifth District Congressional seat in Central and Southside Virginia is heating up. Freshman Rep. Tom Perriello (D) is running a fast-paced campaign against State Sen. Robert Hurt (R), and Independent Jeff Clark.

All eyes in the Fifth District are now focused on the November 2 election.

Rep. Perriello took time out during his busy schedule to sit down in his Washington office to speak with The Herald about his time spent in Congress and the work that needs completing for the citizens of the Fifth District.

“Sometimes my ability to significantly get national legislation to be exactly what I want is not always in my power,” said the Congressman, while reflecting on the last year-and-a-half in office. “But, my ability to support economic development back in the district has just been a tremendous opportunity.”

Perriello said that his office has spent a lot of time working for the Fifth District by building “competitiveness” and working towards job creation.

“That's certainly been a very rewarding part of the process,” he added. “While most of the headlines have been the national policy debate, a lot of the work and a lot of the real impact I feel like I've been able to make is supporting so many small businesses…”

Perriello said he has worked to put together over $3 million in public and private investments for jobs and competitiveness in the district.
<br />“The real impact gets to be about that work,” he noted about ribbon-cuttings versus opportunities that are about increasing competitiveness that could “ripple” throughout the District.

An example of this type of work can be seen in the progress made toward tourism and marketing within the area, he said.

“We really have tried to focus not just on the importance of these investments but investments that we kind of look back on like rural electrification or the Blue Ridge Parkway,” said Perriello.

“We lost that status last year in part because of education cuts,” he said. “Getting this emergency funding paid for and saving teachers in the classroom is not just about making sure kids get the teachers they deserve but it's really about the competitiveness and quality of life for our community and I think many of our schools and counties have spent a generation building up the reputation of Virginia's schools and that's not something you want to destroy in the short-term because it is a big part of families wanting to locate and businesses wanting to locate…”

Perriello was speaking about the recent notification that area schools will receive additional federal funding from the Education Jobs and Medicaid Assistance Act to restore budget cuts that were previously made to close gaps.

Clean energy and infrastructure are also top priorities for the congressman.

“We believe that Central and Southern Virginia can be a capital of the new energy economy,” he said. “We already have tobacco farmers growing new product that is making our country more secure and making farmers more money.”

“They did a biomass boiler with forestry products years ago and now other colleges are starting to replicate,” he noted about investments that lead to future opportunities.

While in office, Perriello voted against regulation for family farmers, introduced an alternative estate tax bill so that family farms would be excluded from estate tax, and co-sponsored legislation to give tax breaks to farmers who donate food to local food banks.

“The investments that we are making in the energy economy are making sure that those jobs of tomorrow are starting to be created in our area,” he continued about local counties being able to create jobs and infrastructure opportunities.

According to Perriello's website, he is a “strong supporter of an individual's right to bear arms” and has “fought for clean streams and forests for Virginia's sportsmen.”

In Virginia, especially the Fifth District, agriculture and forestry is still the single biggest sector of the economy.

“We have been able to continue out competing in ag(riculture) and forestry but if we are still doing it in 10 years the same way we were doing it…we won't be that competitive,” he offered.

Concerning Sen. Hurt's campaign and decision to opt out of debates, Perriello said, “People have to ask the other side what the heck is your plan?

“…You've got to go out and work in the community and get your hands dirty and show that this is where the jobs are coming from and I'm getting on board with helping,” he noted.

Related to the fact that Sen. Hurt has consistently opted out of participating in debates where Clark is present Perriello said he has received concerns from a lot of conservative citizens.

“I have a lot of conservatives come up to me and say, 'I'm just embarrassed,'” said Perriello. “…I think he owes that (participating in debates) to voters particularly since he does have a track record of raising taxes and electric rates and opposing unemployment benefits…”

The congressman also touched on bills that have been passed related to opposing the outsourcing of jobs to other countries.

“I have spent a year and a half screaming into the wind about the need to move from a bail-out approach to the economy…to a growth in main street approach and to getting back to making things in America,” explained Perriello. “If you noticed in the last six weeks that has finally gotten through and it took me a year and a half to make the case but you are hearing people talk about making things in America…”

According to Perriello, a small group in Washington has fought for this idea.

“Unfortunately, Sen. Hurt has been in line with the elite and lobbyists,” he said. “…It's exciting to see that kind of shift in this of all years. And I think it's important to also keep in mind that, in the meantime, it's important this country live off the promises that it's made to, particularly, seniors and veterans.”

Perriello also worked in Congress to extend Medicare, he said.

“I think a man has to show up at a debate and say 'Here's why I think it's okay for Medicare to start going bankrupt in six years.' I made tough choices to make sure that it was going to be there for at least a generation and I want to have that debate. That is one of the fun things about this campaign. It's not a coincidence that I have won more public events and debates because I want to get the truth out about what we've done and if we just get the facts out we win this thing,” he added about the campaign trail and Town Hall meetings.

“We just have to get out there and give the truth.”

The short-term work related to preventing a depression and the long-term decisions that will create jobs and make Virginia's Fifth District competitive is also always on Perriello's mind.

While speaking with The Herald in between sessions he noted that Congress was about to vote on Congressional Made In America Promise Act (H.R. 2039).

“We have to make that commitment towards jobs that you can support a family with,” he said. “Farmville and Prince Edward are doing better than a lot of areas because the local leaders, public and private, have done a good job with diversifying the economic base and we've been able to come in and support a number of those legs that the stool is standing on.

“It's tough in these times to be thinking optimistically,” he continued about the current state of the economy. “But if you really look at the engine that is starting to crank, we are headed in a direction that, I think, is going to make America a lot stronger than we were going into this situation.”

Congressman Perriello was elected to the U.S. House of Representatives in 2008 and prior to that he was a national security consultant and founded a number of faith-based organizations.

He attended Albemarle County Public Schools and St. Anne's-Belfield. He was also an Eagle Scout in the Stonewall Jackson Area Council.

He received his law degree from Yale University and accepted an assignment working in the West African countries of Liberia and Sierra Leone. He also served as a national security analyst for the Century Foundation and has worked in Darfur and Afghanistan.

He helped found FaithfulAmerica.org in 2004 and the Catholics in Alliance for the Common Good. These faith-based organizations work for children's healthcare, higher minimum wage, and environmental stewardship.

According to Rep. Perriello's website, “Tom believes that America must reverse the erosion of our commitment to the common good and restore our understanding that our nation rises and falls together.”

In the 2008 election, he ran against Rep. Virgil Goode, a six-term incumbent, and was certified the winner after a recount.

Most noted, he voted for the American Recovery and Reinvestment Act, against releasing the second $350 billion of the Troubled Asset Relief Program (TARP), and for the health care reform legislation.