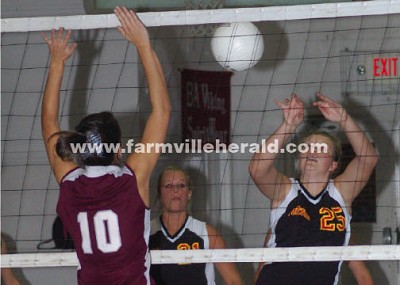 The Lady Falcons, who move to 6-2 and 4-2 in the VCC used a series of large runs to gain advantages in its three set victories, but, did have a head-scratcher in the second set.

“I'm not sure,” said FS head coach Lora Smith. “I do know that we weren't crisp in our passing, and we were a little late getting to where we needed, but I'm happy that we corrected it quickly and played pretty well in the final two sets.”

Fuqua led 9-7 in the third set, and extended the lead to 13-7 with a 4-0 run, aided by two digs by Tatum Davis. The teams traded points before Charlotte Cave, who early in September had a perfect serving game, put together a 10-0 run in service to turn a close contest into an easy set. By the time the Lady Falcons turned things back over to Brunswick Academy, the Lady Eagles had built a 24-12 lead. Davis completed things with a kill to close out the third game.

Davis set the tone early in the fourth game with an early kill, followed by an ace and a dig to give the Lady Falcons a 7-3 lead. Up 8-5, Caroline Bryant took the serve and seven consecutive points to build a comfortable lead. In the run, she accounted for two aces, while Cave registered a kill. The Lady Falcons were able to cruise the rest of the way to secure their sixth victory, and to keep pace with VCC frontrunners Richmond Christian and Tidewater – the only two teams to hand the Lady Falcons losses to date.

“We're coming along very well. We're younger than most of the teams in the league, other than, maybe, Southampton, and we're steadily improving. Everyone improves as the year goes on, but I feel we're making remarkable progress.”

Fuqua was scheduled to host Christchurch on Thursday night. That will mark the midpoint of the VCC schedule – a schedule that has seen Fuqua pile up a lot of miles on the bus. The Lady Falcons will be awarded with a home-heavy schedule in the second half, as they press to stay in the VCC title picture.

“I'm looking forward to getting a stretch of home games,” said Smith. “We've done well, but I do believe our best volleyball lies ahead.”