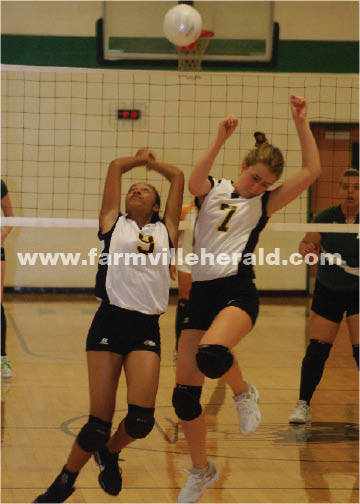 “This was something we needed as we head into district play,” said PECHS head coach Bruce Bogese. “Buckingham played well all night. They played two very, good games. They were a different team than what we faced last week in Farmville.”

“We played much better, and we've made great strides, but we've got to finish games like this,” said BCHS head coach Ethan Abruzzo. “It was there, but we made some mistakes that hurt us. Silly mistakes, like service errors.”

Buckingham (0-5) eased to victory in the first game, scoring many of its points off of Prince Edward errors. BCHS settled down in the second game and started to score points on its own. The Lady Eagles had trouble matching the height and power of BCHS senior hitter Sarah Frasier, who helped keep the Lady Knights from falling behind after PE had rallied to tie the game at 20.

The two teams traded the lead in the third game, but with Buckingham up 19-17, Prince Edward rallied to turn the momentum by scoring eight of the next ten points to extend the match.

Matching the intensity of a late-season district match, the two teams matched one-another save for save, working to produce several long rallies in the fourth game.

PE held the lead for most of the fourth game, and held on for the victory on service and return errors. PE hitter Shadae Childress began to get her returns in the court, leading to several PE points.

In the short fifth game, Prince Edward used a 5-0 run to gain a 9-4 advantage and was able to hold on for the victory.

“It's never over until it's over, and I have to give credit to, Amy Dews, Rachael Thomson and Allison Dalton,” said Bogese. “They never lost their composure, and took over when they needed to do so. We could've quit and gone on to the next game, but we maintained our focus and were able to win a match that maybe we shouldn't have won. Two or three points the other way, and they're winning.”

“It hurts,” said Abruzzo. “We've played well all year with the exception of last week at Prince Edward. You've got to win three games to get a victory, and we were close, but came up short. The girls are a little disappointed right now, but that's good. You don't want them to be happy with a loss.”

Prince Edward was scheduled to begin district play on Thursday night at home against Park View, and will travel to Bluestone on Tuesday.

Buckingham, which lost to Appomattox in four games on Tuesday night, will travel to Cumberland next Wednesday to play a match that will not count in the James River District standings.

Allison Dalton was 24-25 serving and led the Lady Eagles with eight kills on the night, as Prince Edward defeated Randolph-Henry 3-0 in PE's final match before the start of district play.

Shadae Childress was 18-20 in attacking with seven kills, while Rachel Thomson had 28 assists, as the Lady Eagles avenged their only loss of the season.

Tigers Get Defensive In Win Over NC Wesleyan