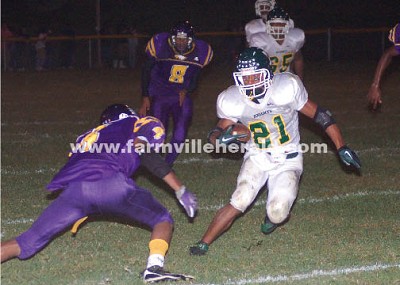 FARMVILLE – It had been nine years since the Buckingham Knights celebrated a victory on the Prince Edward County High School football field, so with the momentum of a 15-game regular-season win streak on its side, the Knights wasted little time in getting a quick advantage on the Eagles, building a big lead just before halftime and cruising for a 47-13 victory.

“Over the years, it's been a tough place for us or for anyone to play,” said BCHS head coach Craig Gill, who showed that coaches have a long memory. “We knew they had the athletes to win if they could get some confidence. I still remember when they were in a similar situation and throttled an undefeated Gretna team [in 2002]. We didn't want that to happen to us.”

Buckingham made sure of that. Senior tailback Maurice Taylor, who was still in elementary school when the Knights last won in Farmville, was their primary weapon early on.

He capped an eight-play 80-yard opening drive with a one-yard touchdown on a direct snap to put the Knights ahead 7-0, just four minutes into the contest.

It looked like Prince Edward, using a modified version of the spread offense, was going to respond quickly. The Eagles, primarily led by senior quarterback Jeremy Walker moved down the field in large chunks, before their drive stalled on downs at the BCHS 22-yard-line.

“We had some early success with our “fly package,” said PECHS head coach Terrence Edmonds. “When we saw that they were overplaying on the ends, we cut our runs up the middle, and it worked. We got to fourth-and-one, and I went into our power package to try to get the yard, but we weren't able to convert. Maybe we should've stayed in the fly, but they had made an adjustment, so I thought we could get a yard by giving them a different look.”

It didn't work, and three plays later Taylor was back in the end zone to put the Knights up 14-0.

Prince Edward managed to keep the game close for the majority of the second quarter, even as the BCHS defense turned up the pressure. The Knights, who saw a third potential score end on an interception by PE's Noah Bowman, didn't skip a beat. At one point, the Knights' defense recorded eight-consecutive negative-yardage plays.

Taylor scored again on a 12-yard run with 6:09 remaining in the half, and just before the intermission, put the game out of reach, scoring two more times. The first with on Taylor's fourth touchdown run with 50 seconds remaining and the second on a Tarian Ayers pass to LA Briley with ten seconds left in the second quarter. The Knights led 34-0 at the intermission.

Prince Edward put together a solid drive to begin the third quarter, capping the 52-yard drive with a 20-yard touchdown run by Ralick Lockett, but Buckingham responded with another scoring drive to keep the cushion at 40-7.

“We had some good drives, but we still have some issues on our lines that we'll need to address,” said Edmonds. “I know we're young on the line, with the exception of Bowman, who has been solid, but the line works as a unit, and we've got to get some confidence and be the guys that hit first.

“We cut our turnovers down to two. They both led to scores, and happened at bad times, but for the most part, I thought Walker ran the ball well and is growing into his role.”

“We had a good week of practice, and carried it right into the game,” said Gill. “I thought we played well on both sides of the ball. It was probably our best defensive performance to date.”

Taylor led the Knights offensively with 253 yards on 18 carries and four touchdowns. Johnson had 77 yards on eight carries and added a touchdown.

Ayers was 7-12 passing for 130 yards and two touchdowns, while Caleb White had four catches for 50 yards and a touchdown. Camre Johnson had two grabs for 40 yards and Briley had the one 40-yard touchdown catch.

Defensively, PE was led by Bowman (interception) and Smith who had seven tackles apiece. Walter Christmas had two sacks on the evening.

The Eagles receive a bye Friday.

“It comes at a great time for us,” said Edmonds. “We've got some work to do on our offensive line, and we've got to get healthy before beginning out district schedule. We've just got to stay positive and keep our spirits. We've got to decide to do better and do what we need to do to accomplish it.”

Buckingham will host Fluvanna on Friday night at 7 p.m.

“They were off last week, so I know they'll be ready for us,” said Gill. “We've got to keep doing what we've been doing so far. We've done a good job of keeping our penalties to a minimum, and we've held onto the ball for the most part. If we keep doing that, we'll keep putting ourselves in good positions to win games.”