Knights Ease Past Chatham At Home 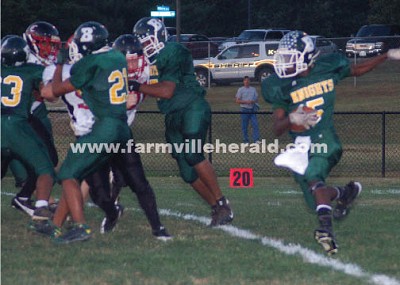 BUCKINGHAM – If there was ever a chance for the Buckingham County High School football team to fall victim of a trap game, last Friday night could've fit the bill.

It didn't. The Knights refrained from looking past Chatham in the non-district home contest, and moved the football effectively in the 40-16 victory to run their consecutive regular-season win streak to 17 games.

“It was really hot in practice leading up to the game,” said BCHS head coach Craig Gill. “But we had a great week leading up. This bunch likes to work, and their efforts paid off in the result.”

As has been the norm all season, Buckingham used a well-balanced offensive attack. Despite losing senior tailback Maurice Taylor to a thumb injury in the second quarter, the Knights were able to build a comfortable lead, due in large part to the rushing performance by freshman Kenneth Johnson, who led the team with 66 yards.

Buckingham put the game away in the third quarter with two scores – a 14-yard touchdown run by Johnson and a 5-yard option keeper by Ayers with 2:46 remaining in the third.

BCHS extended its lead to 34-0 early in the fourth quarter after Camre Johnson recovered a fumble at midfield, and Kenneth Johnson rushed in from four yards out.

Chatham, which was stifled by the Buckingham defense all night, began to move the ball through a number of misdirection and option plays, against the Knights who were substituting liberally. Chatham scored its first touchdown with four minutes remaining to close the gap to 34-8.

Kenneth Johnson scored Buckingham's last touchdown of the night, his third, on a 40-yard interception return with 57 seconds left to play, and Chatham closed the scoring with 4.2 seconds remaining to bring the final score to 40-16.

“We've still got a few things to iron out, but I thought we had a good night both offensively and defensively,” said Gill.

In addition to Johnson's performance, Taylor rushed nine times for 64 yards, while Briley had three carries for 58 yards and a touchdown. Ayers rushed six times for 35 yards and a score.

Buckingham will travel to Manassas Park this Friday for a 7:30 p.m. contest. Like the Knights, the Mustangs are undefeated. Though it's a non-district contest, it will be a big one in terms of possible playoff seeding.