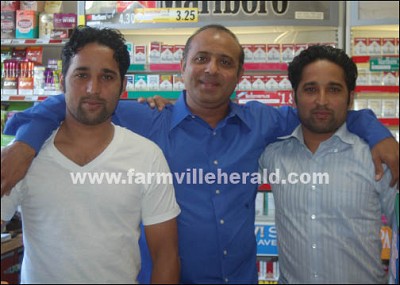 Muhammad Umar Alahbakhs, business owner in Prospect, is living his dream in America, but he can't forget the nightmare unfolding in his homeland of Pakistan. The rural Punjab region of Pakistan that Umar called home has all but disappeared in the worst flood in 80 years in that country.

“In 100 years there never was a flood like this,” Umar stated. “Our grandfathers never saw anything like it.”

Modern technology has allowed Umar to see the images for himself.

“I see the people in front of their homes,” he said. “The flood is taking their houses. The people are losing their kids, their parents – for some their whole family is lost. The people don't have anything. They don't have water or food, not even clothes. They are sitting outside. This is a terrible thing.”

The flooding in Pakistan began in July with the monsoon rains.

“Once the rains started it came from the mountains, the rivers all came together,” he continued. “Hundreds of villages and cities – all is gone. Almost five million people are misplaced.”

Umar is originally from a small village in the southern Punjab region of Pakistan.

“It's a small town near the coast south of the city of Bahawalpur,” he pointed to a map. “It's a family town, like Farmville. They are farmers. They keep a minimum of five or six sheep or goats at every house, also water buffalo. Now hundreds of thousands of animals are dead.”

The flood has affected all Umar's family and friends.

“My family, my friends, my close friends lost everything,” he said. “They are mostly staying in other places.”

Umar is doing what he can to send aid to Pakistan, and he is deeply appreciative of the outpouring of concern and donations by the American people.

“We try to help as much as we can do on our salary,” he said. “American people are so kind. The Pakistani people thank the American people for that help.”

Growing up in Pakistan, Umar sensed the kindness of Americans, hence his dream to come to this country.

“When I was young I watched Hollywood movies,” he related. “I said – I wish I could go there. This country I want to see.”

“I got a visa and came to America,” he said.

He planned to settle in New York City, but that didn't work out.

“There was too much cold there,” he said with a smile. “I like warm weather.”

Umar visited a friend who had a store in Prospect and liked what he saw.

“In a couple of years I bought this business,” he explained.

Umar, along with a cousin Muhammad Bakhsh, has been proprietor of the Prospect Chevron (now Marathon) on Rt. 460 near the intersection with Prospect Road for the past eight years. Three of his sons have also joined him.

After a decade, Umar is happily pursuing the American dream he imagined years ago in Pakistan.

“I love America,” he said. “America is the land of opportunity. If you are a hard worker and you are honest you will be successful. This is true.”

Over the years, Umar has observed many people from other countries at his store in Prospect.

“Americans all came from other countries before they came here,” he observed. “This is a land of opportunity for everyone – any kind of person.”

Umar hopes to become an American citizen in the near future.

“It's now my country,” he said with a look of pride.

Umar has learned many facts about American history through his favorite medium – movies.

“I watch old movies about how America was built – about hard work and people who want to do something,” he related.

Umar is impressed by the legacy of American presidents, especially George Washington and Abraham Lincoln.

He also appreciates the fact that in America rules and regulations are not just a matter of rhetoric – they are enforced.

“A lot of countries have rules, but they can't enforce them,” he stated. “Most important is human rights – everybody is equal.”

“I really appreciate the people of Prospect and Farmville,” he added. “They are very kind people.”

He especially appreciates the concern expressed for his family and friends in Pakistan.

“The American Army has been helping with providing food,” he stated. “President Obama and Mrs. Clinton are helping.”

Despite relief efforts from around the world, the situation in Pakistan continues to worsen. As of last week the death toll was estimated to be 1,600. Up to 20 million people, one-tenth of Pakistan's population was effected with at least eight million in need of urgent assistance.

“Now we need medicine,” Umar said. “People are getting sick, they're getting a lot of diseases. Usually when the flood comes you can drink the water, but you can't drink the water now because there are animals in the water, thousands of them are dead.”

A recent report by the BBC related the dire conditions in southern Punjab area; “There are lots of snakes, so there is a huge risk of snake bites, as well as water-borne diseases such as dysentery and cholera.”

In some areas people escaped rising floodwaters by climbing tall trees only to find snakes with the same idea were there ahead of them.

One Punjab farmer and father of nine, also reported by the BBC, described the flood: “We never knew this rain would make us homeless – we are literally left with nothing. The water came at night and we didn't have time to save our belongings. We left everything and ran to save our lives. For more than two weeks now we have nothing to eat, no shelter. Rains which we consider a gift of God have turned into the anger of God.”

“It's unbelievable,” Umar affirmed. “I don't think Pakistan can rebuild this much unless the international community helps. I'm glad they are helping, and we are very grateful about that.”

Umar believes that helping others works both ways.

“Helping others is the best way, and that is what the international community is doing,” he said. “We should try to help each other, and then when someone else needs help another time, we will help them.”

To Umar, that is the American way of life.

“If you need something here, someone will help you,” he said.

Since coming to America, Umar has visited six or seven states.

“I'm one hundred percent sure that God is blessing America,” Umar concluded. “Everybody is equal. It's a beautiful place.”