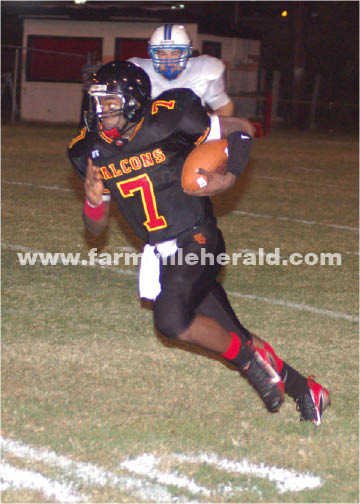 FARMVILLE – The most important plays of a football game don't always have to come toward the end.

For Fuqua School in its 28-6 victory over Southampton Academy last Friday, most of them happened in the first quarter.

Two early fumbles by Southampton were turned into scores by Fuqua, as the Falcons forced the slow methodical Raiders to play catch-up for the rest of the night.

Southampton took the opening possession and drove down the field with relative ease, before fumbling on the Fuqua School one-yard-line.

The Falcons (4-0, 3-0 VCC) recovered and scored on a 59-yard screen pass from quarterback Charles Williams to Michael Marquez with 3.9 seconds left in the first quarter. A two-point conversion pass from Williams to senior Levon Harper gave the Falcons an 8-0 lead.

The Falcons then recovered a fumble on the SA 26-yard-line on the ensuing possession. Three plays later, Marquez scored for the second time on a three-yard touchdown run. Larry Haskins added the two-point conversion on a toss from Williams, who was wrapped up in the backfield to give the Falcons a 16-0 lead.

“They did what they needed to do on that first drive all the way to the one-yard-line,” said FS head coach Lewis Skeeter Fore. “That would've set the tone for the night, but when we got the ball on two fumbles and scored twice, that put the pressure on them. Things settled down after that, but when you can get a two-score lead on a team that eats up the clock like Southampton, it's magnified that much more.”

The Raiders scored on a six-yard run by Rashodd Maxey, but failed on the two-point conversion, leaving the Falcons with a two-score advantage.

Fuqua then answered before the half on a Williams 14-yard touchdown run to run its lead to 22-6 at the intermission.

The Falcons had a golden opportunity to put the game out of reach on its first possession of the second half, and appeared to do so twice on the drive, but two apparent touchdowns were called back due to penalties.

“We had a chance to pretty much end things right there, but for those flags. That's something we'll have to be careful about in the future. It could really come back to haunt us down the road. When you get an opportunity like that, you've got to finish it.”

The two teams moved the ball on one-another for the remainder of the night, but either conventional turnovers or turnovers on downs ended drives for both teams.

Cody Bailey pulled down an interception with 1:52 remaining on the Southampton (3-1, 1-1 VCC) 14-yard line, and Haskins put the game away for good on a six-yard run with 1:08 left to play.

Fuqua's defense forced four turnovers on the night, and held its opponent to under ten points for the third time this season.

“All-in-all, it was a good effort defensively,” said Fore. “Southampton is going to get its share of yards. You've got to keep playing and be ready to capitalize on a mistake, and we were able to do that.”

Haskins had 63 yards on 16 carries and a touchdown, while Marquez had six rushes for ten yards and a touchdown to go along with one pass reception for a 59-yard touchdown. Carter Cunningham had two catches for 54 yards.

Fuqua will travel to Tidewater Academy Friday at 7 p.m.