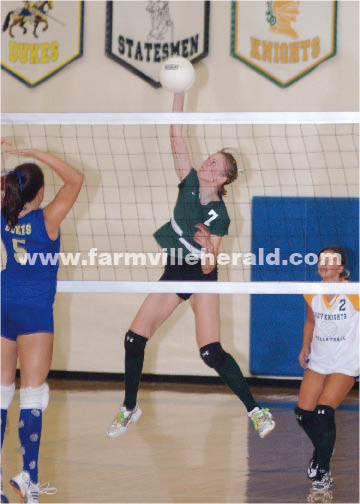 CUMBERLAND – Though it looked like a district match, Wednesday's contest at Cumberland High School between the Lady Dukes and Buckingham did not count toward the district standings.

That didn't matter to Buckingham hitter Sarah Frazier. Her hard serve stymied the Lady Dukes enough that by the third set, Cumberland called a time out just before she was to take her first turn in serve.

“We needed a win,” said BCHS head coach Ethan Abruzzo. “We've been coming close, but couldn't close the deal. Tonight Sarah helped us with her serve, and we were able to get that run of six or seven consecutive points that other teams have been getting on us.”

“I thought it was good for us to see where we stack up against district competition,” said CHS head coach Heather Storrie. “We've come a long way, but we still have a ways to go. Still, other than when we were trying to control [Frazier's] serve, I thought we played pretty well.”

Buckingham outlasted Cumberland in the first set. The Lady Knights were leading 21-16, but Cumberland used a 7-0 run, helped in part by two Maddie Sullivan aces and several BCHS errors to take a 23-21 lead, but Frasier regained the serve for Buckingham with a block, and set the tone for what was to come by winning the next three points to take the narrow victory.

The second set was tied at four apiece when Frazier rotated into the service spot. By the time she relinquished her turn with a service error, Buckingham had jumped out to a 13-4 advantage. Seven of the eight points came on aces. Cumberland battled back and managed to tie the contest at 14 apiece. Sullivan again kept the ball in play on what was otherwise an error-riddled night for both teams in relation to serves. The Lady Dukes were unable to take a lead, and the two teams traded points until Frazier rotated back around to get the final point on an ace to give BCHS a 2-0 lead.

Cumberland held a 7-6 lead when Frazier went back in serve again in the third set. The CHS coaching staff called a timeout, and took the full minute. It didn't matter. Frazier rattled off three aces to begin the run. Then after scoring three more conventional points, Frazier called the officials over to mop up a wet spot on the floor. Even that didn't disrupt her rhythm, as she rattled off three more aces to give BCH a 15-8 lead.

“Although we were leading at the time, we called that time out to try to disrupt her rhythm, and to calm ourselves,” said Storrie. “She has such a powerful serve, and we don't face a serve like that often, so it was an opportunity for us to go over some adjustments. She was in the zone, and sometimes it doesn't matter what you do.”<br />
There would be no comeback for Cumberland this time, as the Lady Knights, content to trade points at point, went on to ease to the third set victory.

“She said she slipped on a slick spot,” said Abruzzo. “It was hot in the gym tonight, so slick spots can develop. I wondered why she would do that when she was running off serves like that, but maybe that break helped her out.”

For the game, Frazier tallied 19 aces to help give Buckingham its first victory of the season and a good measure of what's to come in district play.

“I thought Taylor Hudgens did a fantastic job for us passing the ball tonight,” said Abruzzo. “We passed really well. We still have some things to work on, but I think we're getting there.”

Bush Reflects On 24 Years At H-SC