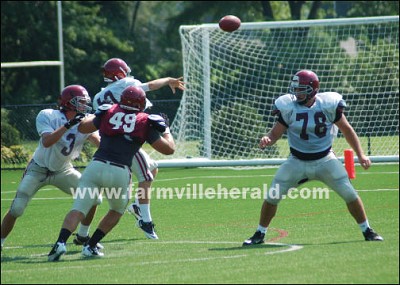 Hampden-Sydney held a controlled scrimmage on Friday afternoon at the turf field. The first strings played about two series, with the defense appearing to have the upper-hand – which is not uncommon this time of year. Above, Will Riggenbach (49) closes in on quarterback Travis Lane just as Lane dumps off a short pass attempt. Hampden-Sydney begins its season, and defense of the 2009 ODAC title on September 4 at Averett.