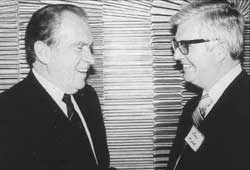 Tom was the son of the late Carl and Glennie Wilck of Farmville. Carl is well remembered in Farmville as a longtime member of the Masonic Lodge and charter member and past Governor of the Moose Lodge. He was also superintendent of public works for the town, and one of three brothers to join Company A (later Company G) of the Farmville National Guard and served with General Pershing in World War I. Carl's brothers were Joe, Paul, Wallace and Ray, and sister, Welma Boggs.

He attended Santa Monica College and the University of California, Los Angeles, CA, and became a public affairs consultant, representing some of Southern California's leading businesses and was involved in many community organizations, from the Boy Scouts to the Orange County Chamber of Commerce.

He worked as Walt Disney's personal public relations consultant throughout the 1960s. His most noted work included helping Disney open Walt Disney World and the California Institute of the Arts.

In 1971, President Richard Nixon appointed Tom as assistant administrator of Congressional and public affairs for the Small Business Administration. In 1972 and 1973 Wilck served as deputy chairman of the Republican National Committee and oversaw press relations for the 1972 Republican Convention.

Tom left Washington, D.C. and served from 1973 to 1985 as vice president of corporate and public affairs for the Irvine Co. as it was planning the development of Irvine and surrounding communities.

In 1985, Wilck formed his own firm, Thomas Wilck Associates, and represented leading corporations in Southern California, including the Walt Disney Co. and the Irvine Co. He merged his company with Nelson Communications Group 10 years later. In 2000, he formed The Wilck Group with his second wife, Nadine, whom he married after Tommie Wilck died.

Memorial services were held at 4 p.m. on August 21 in the East Room at the Richard Nixon Presidential Library and Museum, at 18001 Yorba Linda Blvd. in Yorba Linda, CA.